India   All India  03 Aug 2018  I assure no Indian will be left out of Assam citizen's list: Rajnath Singh
India, All India

I assure no Indian will be left out of Assam citizen's list: Rajnath Singh 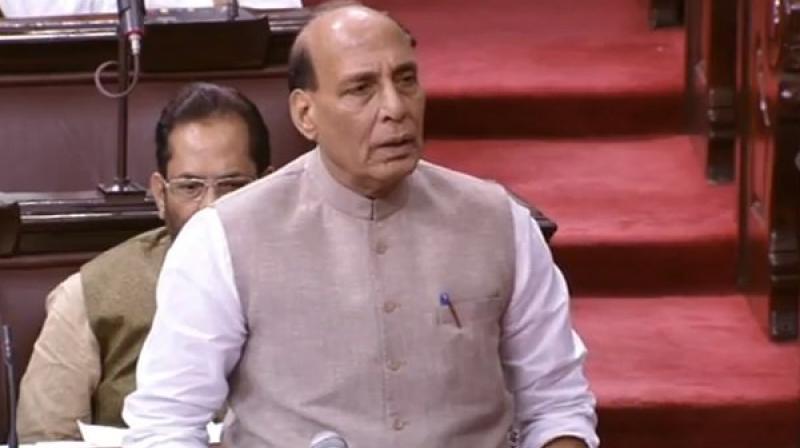 Speaking at the Rajya Sabha, Union Home Minister said, 'entire process is being monitored by the Supreme Court and is completely fair and transparent.' (Photo: Twitter | ANI)

New Delhi: Amid uproar and unabated debate over the National Register of Citizen or NRC draft of Assam that seeks to comb out illegal immigrants from the state, Union Home Minister Rajnath Singh on Friday said, “No Indian citizen will be left out of the list”.

“I would like to repeat that it’s a draft and not final, everyone will get chance to appeal,” the Home Minister told in the Rajya Sabha which has been witnessing protests and subsequent adjournments since Tuesday.

Ever since the draft list was released on Monday, the Opposition has been criticising the government over what it claimed was a political move to cut out Muslim voters ahead of key state elections and 2019 general election.

Rajnath Singh hit out at the Opposition, saying the "entire process is being monitored by the Supreme Court and is completely fair and transparent."

"I assure everyone that no Indian citizen will be left out. There is absolutely no need to worry," Rajnath Singh said, adding that no action will be taken against anyone who can successfully prove their Indian citizenship.

"Everyone will get a chance to apply for citizenship once we have a final list. They will have full rights... nothing will be taken away from them," Rajnath Singh said.

The home minister said that those not included in the final list would be able to appeal to the foreigners' tribunal.

40 lakh people in Assam have been left out of draft National Register of Citizens list. The NRC has been updated for the first time since 1951 to account for illegal migration from neighbouring Bangladesh.

"There is an effort to disrupt harmony. An atmosphere of fear is being created. This must not be done. I urge everyone's support in this process. Let us all work together so that the process is done smoothly," Rajnath Singh told parliament.