It also said the situation was likely to aggravate in the next couple of days in view of the weather advisory by IMD. 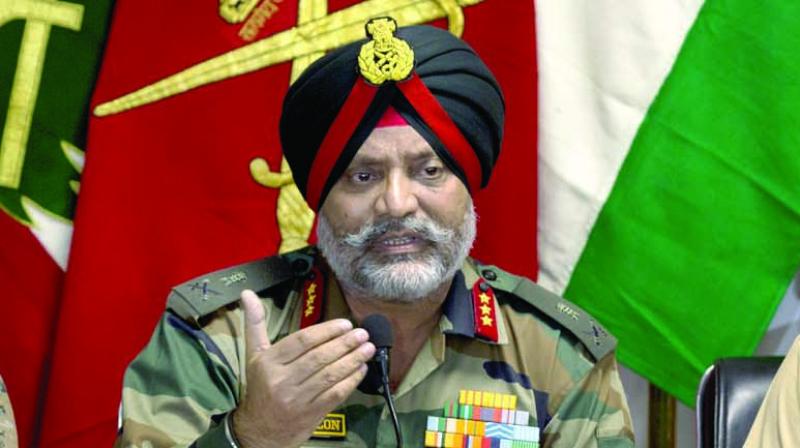 Srinagar: A senior Army commander said on Friday that the Pakistan Army was “directly involved” in militancy in Jammu and Kashmir, which had become evident again after the recovery of weapons with its markings in counter-insurgency operations in the state. He claimed that terrorists backed by the Pakistan Army had planned an attack on the ongoing Amarnath yatra.

“For the last three to four days we are getting specific and confirmed intelligence inputs that terrorists led by Pakistan and the Pakistan Army are trying to target the Shri Amarnathji Yatra which is going on, “ said Srinagar-based Chinar Corps commander Lt. Gen. Kanwal Jeet Singh Dhillon at a press conference here.

The J&K government later on Friday asked Amarnath pilgrims and tourists to curtail their stay in the Valley “in view the latest intelligence inputs of terror threats with specific targeting of the Amarnath yatra and given the prevailing security situation in the Valley”.

Lt. Gen. Dhillon said joint teams of security forces, including the Army, have been conducting search operations along the twin routes of Baltal and Pahalgam leading to the 3,888-feet-high cave-shrine in the Kashmir Himalayas and recovered weapons, ammunition and explosives.

The J&K government had on Wednesday announced suspension of the yatra till August 4, saying the India Meteorological Department (IMD) has predicted heavy rainfall for the next few days all over the state, which may cause landslides and shooting stones along the Jammu-Srinagar highway, while the tracks to the cave-shrine from the Baltal and Pahalgam base camps have already turned “slippery and slushy” after recent heavy rainfall.

It also said the situation was likely to aggravate in the next couple of days in view of the weather advisory by IMD. “In view of inclement weather conditions, shooting stones and landslides particularly in Jammu region, the yatra will remain suspended till August 4,” an official statement said. However, IMD sources said no such weather advisory had been issued by it.

The security advisory issued by J&K’s principal secretary (home) Shaleen Kabra on Friday reads: “Keeping in view the latest intelligence inputs of terror threats with specific targeting of the Amarnath yatra, and given the prevailing security situation in the Kashmir Valley, in the interest of safety and security of tourists and Amarnath yatris, it is advised they may curtail their stay in the Valley immediately and take necessary measures to return as soon as possible.”

Lt. Gen. Dhillon said the kind of weapons recovered from the hideouts of militants and encounter sites clearly indicate the Pakistan Army is directly involved in militancy in Kashmir. He warned that this won’t be tolerated any longer.

He said that a mine with Pakistan Ordnance Factory markings was seized during a search operation in southern Shopian district earlier in the day on Friday. He said an M-24 American sniper rifle with a telescope was also recovered from a militant cache. “It clearly shows that the Pakistan Army is involved in terrorism in Kashmir”, he said, adding: “We’re clearly telling you that this will not be tolerated, but negated at any cost.”

Replying questions, he said the threat of Improvised Explosive Devices (IEDs) in the Valley was “more pronounced”, but it was being tackled effectively by the security forces by conducting regular searches.

He said searches were going on in Shopian where an attempt to attack the security forces was made on Thursday night. IGP (Kashmir range) S.P. Pani, who was also present at the press conference, said over 10 serious attempts to trigger IED blasts were made in the Valley, mostly in the Pulwama and Shopian areas.

The Army commander said the militants, backed by the Pakistan Army, have continued to infiltrate into J&K after breaching the Line of Control fence. He said: “Infiltration from the Pakistani side is being attempted regularly and we are having regular contacts along the LoC whereby infiltration bids by the Pakistan Army and terrorists are being foiled.” He also said that in the past six-seven months the Army and other security forces had been able to eliminate most of the militants’ top leadership and that these efforts were still on.

He said an in-depth analysis of militancy in J&K had revealed that 83 per cent of local youth who joined militancy were previously stone-pelters. “My request to the mothers of Kashmir is to keep a watch on their wards and the activities they indulge in,” he said, saying seven per cent of militants had been killed by the security forces within 10 days, nine per cent in a month, 17 per cent in three months and 36 per cent in six months of their taking up the gun.

He said: “If mothers fail to take their children away from stone-pelting, they should know that there are greater chances of their joining the militants’ ranks, and if they do that they may also know they would be eliminated within one year of taking up the gun.”