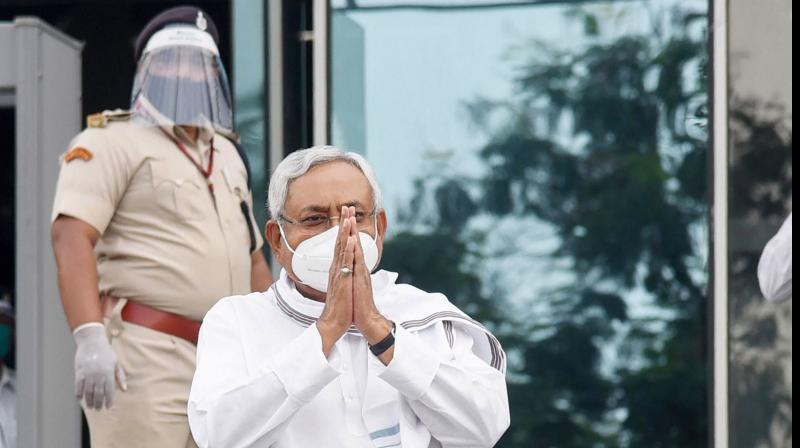 Political leaders across the party line on Monday raised the issue in the state assembly and urged Bihar CM Nitish Kumar to recommend a CBI probe into the death of Sushant Singh Rajput. PTI Photo

Patna: The tussle between Bihar and Maharashtra police over the death of Bollywood actor Sushant Singh Rajput intensified on Monday after an IPS officer from Patna Vinay Tiwary was directed to stay under home quarantine by the BMC authorities.

Reacting over the incident Bihar CM Nitish Kumar said, “Whatever happened to the officer was unfortunate. Our DGP will speak with the authorities in Mumbai”.

When asked whether he would speak with Maharashtra CM Uddhav Thackeray regarding the alleged mistreatment of Bihar cadre IPS officer in Mumbai, Nitish Kumar said that “this is not a political issue for us. We are aware of our legal responsibilities. Bihar DGP would be discussing the issue with authorities in Mumbai”.

The alleged mistreatment of the Bihar police team in Mumbai also snowballed into a political controversy. Political leaders across the party line on Monday raised the issue in the state assembly and urged Bihar CM Nitish Kumar to recommend a CBI probe into the death of Sushant Singh Rajput.

“It is evident that the Maharashtra government is trying to create hurdles in the way of Bihar police who has been sent to investigate the case. Forcing an IPS officer to stay under home quarantine hours after he arrived in Mumbai to lead the probe also raises serious doubts”, BJP MLA and Sushant Singh Rajput’s cousin said.

Neeraj Singh’s demand for CBI probe was supported by the leader of the opposition Tejashwi Yadav who said that “the RJD was the first party to make the demand. I have also requested the state government that the upcoming film city in Rajgir should be named after Sushant Singh Rajput”.

The Bihar police had launched an investigation into the case after the deceased actor’s father KK Singh lodged an FIR against actress Rhea Chakraborty on July 25. He had also alleged huge financial irregularities and accused Rhea’s family of cheating and abetment of suicide.