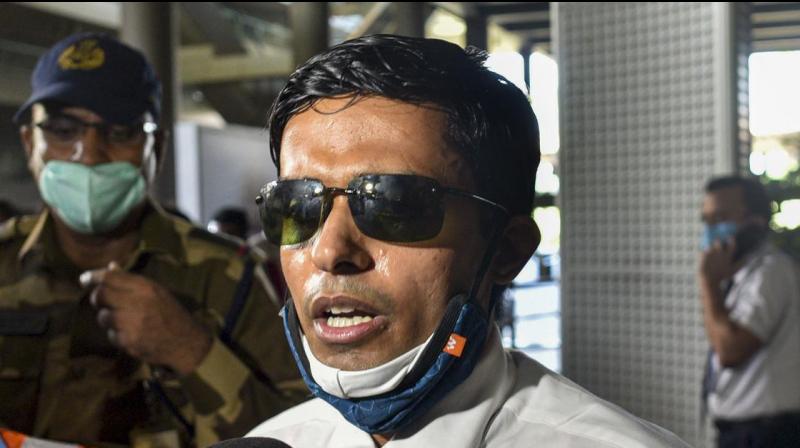 IPS Officer Vinay Tiwari speaks to media personnel after arriving in the city for investigation in the ongoing death by suicide case of Bollywood actor Sushant Singh, in Mumbai on Sunday. (PTI Photo)

Patna: Bihar Chief Minister Nitish Kumar on Monday voiced strong disapproval of the "forcible" quarantine of an IPS officer from Patna, hours after he landed in Mumbai to lead a Special Investigation Team probing the death of Bollywood actor Sushant Singh Rajput.

"Whatever has been done to him is inappropriate," Kumar said when asked about Vinay Tiwari, SP City (East), who is in Mumbai to investigate an "abetment to suicide" case.

He also said the matter has been taken up with the authorities in Maharashtra by DGP Gupteshwar Pandey.

"He (Pandey) will himself speak to the authorities concerned," Kumar said.

When asked about whether he would himself have a word with his Maharashtra counterpart Uddhav Thackeray, the Bihar chief minister said, "It is not a political matter. The issue at hand is a legal obligation of the Bihar police. We will make all possible efforts to fulfil the same."

He, however, ducked queries about recommending a CBI inquiry into the matter, the demand for which has been raised by at least two of the deceased actor's sisters.

The chief minister was approached by journalists at a park where he tied a 'rakhi' around a tree on the occasion of Raksha Bandhan.

He was flanked by key aides including his deputy Sushil Kumar Modi, a senior BJP leader, who has been vociferous in charging the Maharashtra government with non- cooperation with the Bihar police team.

Rajput, 34, was found hanging from the ceiling of his Bandra residence in Mumbai on June 24.

The Bihar police got involved in the matter after Rajput's father lodged an FIR, more than a month after his son's death, accusing actress Rhea Chakraborty and her family members of abetting the suicide.

Bihar DGP Gupteshwar Pandey on Sunday charged that Vinay Tiwari has been "forcibly quarantined" by the civic authorities in Mumbai.

The DGP, who broke the news himself on his twitter handle past midnight, also shared a video footage of Tiwari, lodged in a Maharashtra police establishment with the quarantine stamp on his hand.

Pandey alleged that Tiwari was denied accommodation inside the IPS officer's mess and was made to stay at a guest house in the Goregaon suburb.

He also expressed frustration over the fact that on account of the "forcible" quarantine by municipal authorities, Tiwari will not be able to carry out the investigation.