PM expressed anger at the conduct of some opposition members and noted that those who tore papers, threw it around have remained unrepentant 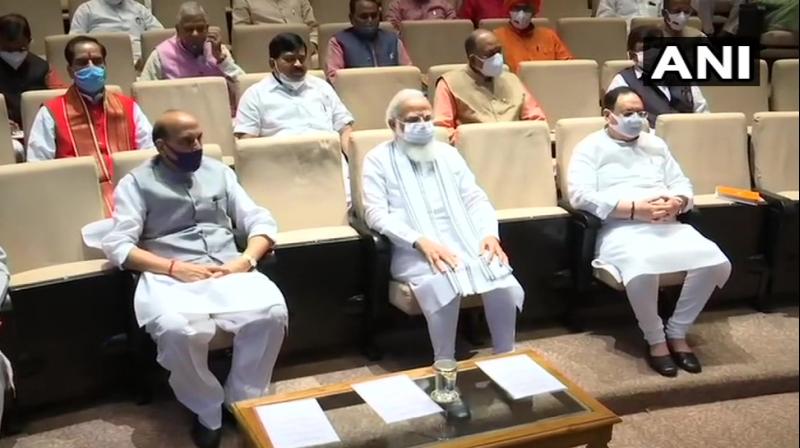 Modi accused them of having "undemocratic" attitude and said they are not keen on meaningful debates. (ANI)

New Delhi: With Parliament's proceedings being stalled by the opposition's protests over the Pegasus issue, Prime Minister Narendra Modi on Tuesday slammed it for its conduct, including tearing papers and making "derogatory" remarks on the way bills have been passed, as he accused them of insulting the legislature and the Constitution.

Briefing reporters on Modi's speech at the BJP parliamentary party meeting, Parliamentary Affairs Minister Pralhad Joshi said the prime minister expressed anger at the conduct of some opposition members and noted that those who tore papers and threw it around have remained unrepentant.

This shows their arrogance, Modi said and asked his party members to maintain restraint.

While a TMC member in Rajya Sabha had torn the statement of IT Minister Ashwini Vaishnaw on the Pegasus issue, several opposition members had torn papers in Lok Sabha and threw it in the air and towards the Chair.

He had tweeted, "In the first 10 days, Modi-Shah rushed through and passed 12 Bills at an average time of UNDER SEVEN MINUTES per Bill. Passing legislation or making papri chaat!"

Such comments are "derogatory" to the parliamentary procedure and the esteem of elected representatives, Muraleedharan said quoting Modi.

The conduct of the opposition is an "insult" to Parliament and the Constitution, Joshi said, quoting the prime minister. Modi accused them of having "undemocratic" attitude and said they are not keen on meaningful debates.

The opposition has stalled Parliament's proceedings demanding a discussion on the Pegasus snooping row, an issue dismissed as inconsequential by the government.

In the meeting, Modi asserted that his government will leave no stone unturned to fulfil its commitment to people. Bills do not belong to the government but are aimed at people's welfare, he added.

The BJP parliamentary party also hailed Modi at the meeting over the government's decision to provide reservation to the OBC and the EWS in the all-India quota in the medical entrance test NEET.

The prime minister also highlighted the rise in the GST revenue in the month of July with a collection of 1.16 lakh crore to express confidence about the state of economy.

Finance Minister Nirmala Sithraman also spoke in detail about the economic conditions and asserted that the recovery has gathered pace despite the second wave. India's foreign reserves are at an all-time high while the GST collection also rose significantly last month, she added.

The government's package for the MSME sector is now at Rs 4.5 lakh crore while the banking sector has also made recovery and posted profit of over Rs 31,000 crore, sources quoting her said. Economic indicators have been doing well, she said.