India   All India  03 Sep 2017  Moderate rain in city, but Bengaluru under water
Metros, In Other Cities

Moderate rain in city, but Bengaluru under water

With the city witnessing incessant rains since Friday, everything has come to a standstill, a la Mumbai. 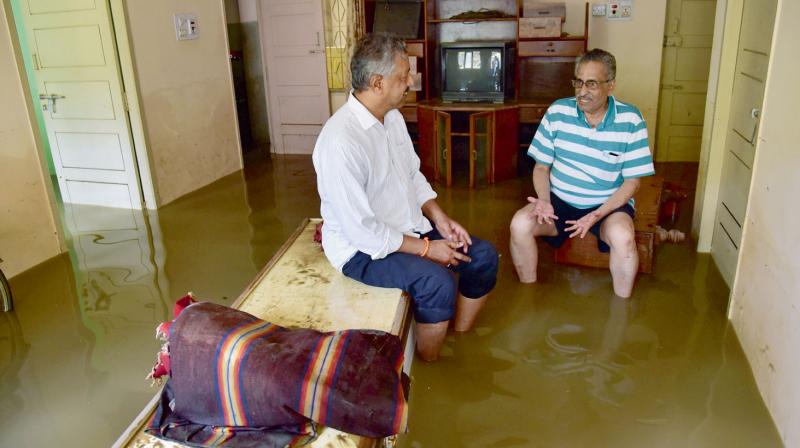 Residents sit on a bed as rainwater clogged their house in Koramangla, Bengaluru, on Saturday. Residents of ST Bed Layout and Koramangala 4th Block, who had just recovered from the inundation on August 15, once again had sewerage water entering their homes on Friday night. (Photo: PTI)

Bengaluru: With the city witnessing incessant rains since Friday, everything has come to a standstill, a la Mumbai. But unlike coastal Mumbai, Bengaluru is located 920 metres above sea level, but it is still struggling to drain off excess water caused by mere three centimetres of rainfall on Friday.

He stressed on the need for a proper drainage system and channels for the rainwater to be directed towards lakes and water bodies.

Srinivasa Reddy, director of Karnataka State Natural Disaster Monitoring Centre (KSNDMC) said, “Incessant rains have made the city saturated and there is hardly any space to drain out rainwater. City’s runoff coefficient (amount of runoff to the amount of precipitation received) which was at 30 per cent, is now at 80 per cent. Rapid concretisation has shrunk the exposed areas for the rainwater to seep into the ground.” Where will the rainwater go? It will runoff to the nearby shoulder drains and stormwater drains. If they do not have the needed carrying capacity and are clogged with construction debris, garbage, plastic and what not, it enters homes and floods roads, explained Srinivasa.