Stressing that it was a big responsibility, Sitharaman said she was 'very grateful for the confidence the PM has in her. 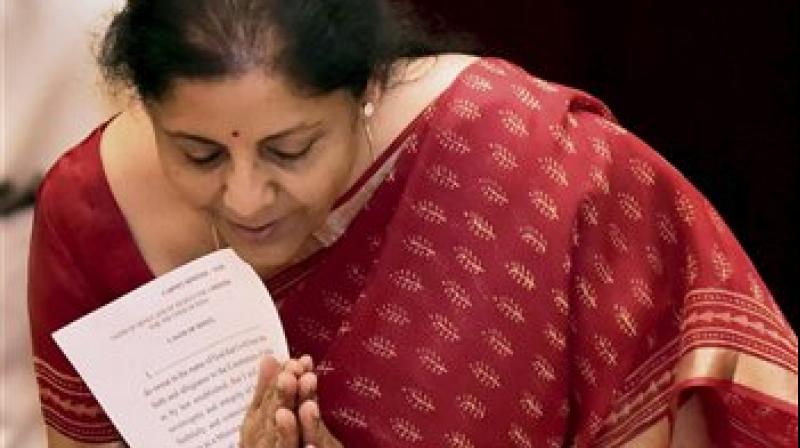 Sitharaman also credited her elevation to a cabinet rank minister to 'cosmic grace' and support from party leadership. (Photo: PTI)

New Delhi: Nirmala Sitharaman, who landed the crucial defence portfolio in a major rejig of the Modi government, on Sunday said she was “overwhelmed and humbled” and will serve the country with something she was “constantly” thinking about.

Sitharaman, who became the first full-time woman Defence Minister of the country, also credited her elevation to a cabinet rank minister to “cosmic grace” and support from party leadership.

Moreover, she is the second woman to take charge of the crucial ministry as Indira Gandhi, as the prime minister, had also held the portfolio in the seventies.

“I am just overwhelmed and humbled. I can serve the country with something which is constantly on the top of my mind,” she said.

Stressing that it was a big responsibility, Sitharaman said she was “very grateful” for the confidence the Prime Minister has in her.

Asked whether dealing with Pakistan in view of terrorism will be her priority, she said “I have not even taken charge. I don’t think it is appropriate to comment on it now...give me some time.”

To a query whether her elevation showed Prime Minister Narendra Modi’s commitment towards women empowerment, she said the Prime Minister has always been in favour.

“I know his working style since the time he was in Gujarat ... He always believed in giving women their due share. His belief is that women can also perform,” she said.

Sitharaman was among the four junior ministers, who were given cabinet berths at the reshuffle on Sunday. Sitharaman was earlier the Minister of State (Independent Charge) Commerce.

“Somebody who has come from a small town, grown into the party with all the support of the leadership, and if given such responsibility, it just makes you feel sometimes that cosmic grace is there. Otherwise, it is impossible,” she told reporters in Delhi soon after taking oath.

To a query on the opposition criticism of her working as the commerce minister, the BJP leader said she was neither averse, nor frightened by criticism.

“Every criticism is a message and we have to learn from it. I am not averse to criticism and also not frightened of it, but certainly take messages from them.

“Criticism per se do not reflect on performance. It only adds to your performance if you are ready to take on-board the corrections that may be workable,” she said.

Sitharaman was also quick to highlight a number of initiatives by the commerce ministry like Start up India and Make in India.

“With the support of the prime minister, so many things have happened in the ministry like Start up India, Make in India etc. There is some misconception about ‘Make in India’, but it will be answered,” she said.