Arora, who succeeds Ion Mincu Radulescu, the incumbent chairman from Romania, has been given the charge for two years from 2019 to 2021. 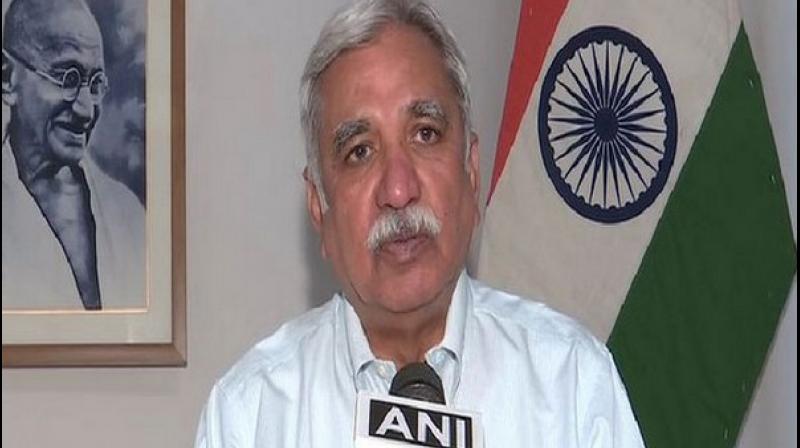 Arora assured the new team that he would extend wholehearted support and handholding as and when required to carry forward the ideals of AWEB. (Photo: ANI)

New Delhi: Sunil Arora, the Chief Election Commissioner of India, on Tuesday took over as the new Chairman of the Association of World Election Bodies (AWEB) for 2019-20 as India takes over the Chair from Romania.

Arora, who succeeds Ion Mincu Radulescu, the incumbent chairman from Romania, has been given the charge for two years from 2019 to 2021, an Election Commission statement said.

India was unanimously nominated to be the Chair of AWEB at the last General Assembly held at Bucharest in 2017. The AWEB Flag was handed over to Arora by Radulescu.

The Flag will remain with Election Commission of India for the two-year term till 2021. More than 110 delegates from 45 countries attended the meeting.

Accepting the responsibility as Chairman of AWEB, Arora said ECI looks forward to further strengthening its interaction and thanked the members for the trust and confidence reposed in the Election Commission of India.

The General Assembly also ratified the appointment of the new Vice Chairman of AWEB - Glen Vuma Mashinini, Chairperson of Election Commission of South Africa and the new Secretary-General, Jonghyun Choe, from the Republic of Korea.

Arora assured the new team that he would extend wholehearted support and handholding as and when required to carry forward the ideals of AWEB.

Noting that a number of nascent democracies are still working on to stabilize their political system through improving their electoral and legal systems, Arora said this was where organisations such as AWEB provide a valuable contribution, professional support and advice by sharing innovations, experience and skills with support from and participation of its Members.

"Free, fair, credible and professionally managed elections form the bedrock of a healthy and vibrant democracy," he said.

Since its inception in October 2013, AWEB has marched ahead empowering the democratic framework of member countries.

Arora announced that an AWEB Centre would be set up at the India International Institute of Democracy and Election Management, New Delhi for documentation, research and training; for sharing best practices and capacity building among the members EMBs of the Association.

India, the host nation for 4th general assembly, has been one of the founding members of the AWEB.