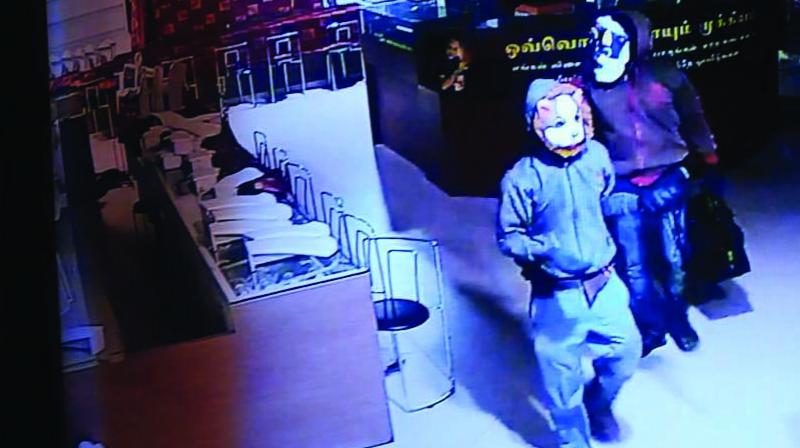 A CCTV footage of the two masked burglars.

Tiruchy: Two burglars, in a Hollywood-style heist, broke into a jewellery showroom in Tiruchy late Tuesday night and decamped with about 35 kg of gold, diamond and platinum ornaments. The heist near the Chathiram bus stand came to light on Wednesday morning when the employees opened the showroom at around 9 am and found the racks empty, the police said. According to reports, the jeweller had placed six guards on night duty outside the showroom.

Lalitha Jewellery owner Kiran Kumar Reddy, who rushed from Chennai to assist the police, said that preliminary estimate of the loss was around Rs 13 crore. He expressed hope that the police would be able to crack the case.

On examination of CCTV footage, the two burglars were seen with their faces covered with animal masks. They also used gloves to make sure no fingerprints were left behind.

Senior police officials, including Tiruchy police commissioner Amalraj, rushed to the spot and launched a probe. Seven special police teams have been formed to crack the case.

The masked men drilled a one-foot hole on the left side wall of the showroom, just enough for a man to crawl through. It was “quite likely” that other members of the gang were keeping a watch outside while the robbers went about their job unhindered through almost 90 minutes, an official said, adding that they took away the ornaments only from the ground floor and left the top two floors untouched.

The officer said that two of the police teams were intensely questioning the six guards as the involvement of insiders could not be ruled out.

The special teams are also examining CCTV footage obtained from nearby buildings to get clues about the incident. One of the police teams has been tasked with checking nearby lodges to find out about guests who checked in and out.

Tiruchy district superintendent of police Zia-ul-Huq said there were similarities between this robbery and the one carried out by drilling a hole in the wall to loot jewels from the lockers of Punjab National Bank in Samaya-puram of Tiruchy district in January this year.

One source said the thieves had left behind a small crowbar, possibly used to break through the wall and some other tools like screwdrivers they had used to open the display cases.

Forensic teams are working on decoding the heist and trying to get clues from the perpetrators’ modus operandi.

The Chennai-headquartered Lalitha Jewellery group has branches all over Tamil Nadu, besides Karnataka and Andhra Pradesh.