Aaditya is first of his family to contest election in five decades since his grandfather Bal Thackeray founded the Shiv Sena. 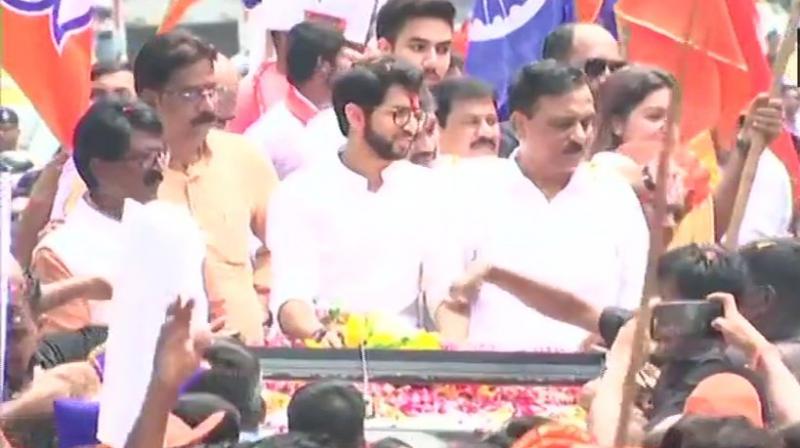 Mumbai: Shiv Sena leader Aaditya Thackeray took out a huge roadshow with a sea of supporters waving saffron flags and chanting slogans in favour of him in Mumbai on Thursday. The show of strength came ahead of filing his nomination papers to contest Maharashtra Assembly election from Mumbai’s Worli.

He is the first of his family to contest an election in the five decades since his grandfather Bal Thackeray founded the Shiv Sena.

Aaditya Thackeray was seen waving at people, against the backdrop of his portraits and saffron Sena pennants held up by workers, as his open top jeep glided through a narrow street in Mumbai. The occasion became a huge show of strength for the Shiv Sena, which has been pitching him as the party's chief ministerial face.

Last week, Uddhav Thackeray had recalled the "promise" he had made to his late father to install a 'Shiv Sainik' (party worker) as the chief minister of Maharashtra.

The 29-year-old leader began the road show from a Shiv Sena office in Lower Parel and ended it at the BMC Engineering Hub in Worli, where he filed his nomination papers.

Addressing a gathering of party activists, Aaditya said, “I love politics since childhood as I used to tour with my grandfather and father. Whenever my friends and others questioned me asking what else I can do, I told them I can't do anything else but politics. To do something new, politics is the only medium that can change the lives of crores of people."

Huge hoardings of Aaditya have come up across Worli, where he is likely to get a walkover; it is a Sena stronghold and the only opposition, NCP's Sachin Ahir, crossed over recently.

The only other Thackeray who came close to contesting an election was Raj Thackeray, who announced he would fight the 2014 Maharashtra polls but later backed out.