Writer-activist Nityanand Jayaram also believes that plastic products are back in circulation, courtesy lax implementation and enforcement of the ban. 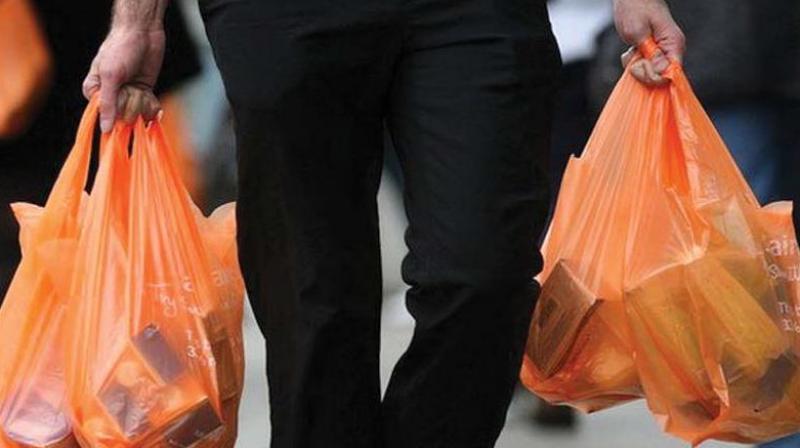 The livelihood of thousands of workers and small traders were hit and illegal dealers are thriving, but the ban forced many upscale shops and eateries to switched look for other alternatives.

CHENNAI: It’s eight am on a Tuesday morning and this popular restaurant at Adyar is already abuzz with activity as a long queue forms for tables and waiters run around taking and delivering orders. In the far left corner is the takeaway counter and on its shelves lie a hundred plastic cups and boxes, neatly stacked one on top of another.  And nearly over eight months since the Tamil Nadu Government announced a blanket ban on non-biodegradable and single-use plastics (SUP), plastic commodities are slowly making a comeback in the city — this time, however, sourced from the neighbouring states and some elusive dealers.

The present ban has not only crippled the livelihood of thousands of workers but has also created a thriving market for numerous illegal dealers, alleges G. Sankaran, president, Tamil Nadu-Pondicherry Plastics Manufacturers Association. “The consumption of plastics in the state stood at 10 lakh tonnes per year earlier. There has been no remarkable change in this number,” he claims. Though the production of plastics by licensed manufacturers has considerably gone down, he says, banned plastic is still being produced extensively by unwarranted manufactures.

“One kilogram of single-use plastic, which was earlier priced at `100, is now reportedly being sold at `150 by some. Bio-degradable plastics or green plastic is also not a solution, he asserts.”  Biodegradable plastics cost `450 per kilogram whereas the normal plastic costs `100. Now tell me, which one will the public purchase?” he asks. Reportedly, tons of plastic is transported every day from other states and fake products dubbed as ’recyclable’ plastic is also in circulation.

Writer-activist Nityanand Jayaram also believes that plastic products are back in circulation, courtesy lax implementation and enforcement of the ban. He notes that though the ban was in effect for the first few months, the failure on the civic body’s part to conduct regular spot checks has resulted in plastic commodities slowly creeping back into the market.

Several MNCs still sell their products wrapped in SUPs and the government is doing nothing about it. The Plastic Waste Management (PWM) Rules 2016 mandates MNCs to collect back the plastic waste being generated by their brand items, by themselves or assign some party to do so. He points out that this is currently not being followed in the state.

“If the ban had been effective, we should have seen an alternate economy (built on plastic alternatives) thriving. Clearly, this is not the case. The government has also not announced plans so far to create an alternative livelihood for those affected by the ban,” he alleges. Notably, when the ban was first introduced, the government had announced its decision to support women’s co-operatives, entrepreneurial ventures and start-ups working on plastic replacements. Nityanand alleges that these plans too have not been pursued.

Another reason this ban might not have had the desired impact is the high price of the alternatives. In a laudable move, the government had released a descriptive list of 12 eco-friendly alternatives to plastic, including cloth bags, glass containers, paper plates and cups, banana leaves and areca nut plates at the time of the ban. Ms Deepthi, a teacher and resident of Mylapore, says that though the public is aware of the ill-effects of plastic usage, the prices of cloth bags and other substitutes prompt them to buy plastic, which comes at a relatively lower cost.

However, G. Prakash, commissioner, Greater Chennai Corporation, tells us a different story. While he admits that there are a few cases of lacunae, the ban has largely been successful, he says. “We have seized over 300 tonnes of plastic until now and `75 lakh to `80 lakh fine has been collected.”

According to the Tamil Nadu Panchayats (Second Amendment) Act, 2019 penalties for ‘storage, supply, transport, sale and distribution of use-and-throw plastics’ was fixed at `25,000,     50,000 and     1,00,000 for first, second and third-time offences respectively.  He says that while big shops and eatery joints have visibly switched to bio-plastic, cloth and paper bags authorised by the Tamil Nadu Pollution Control Board (TNPCB), it is the small shops and vendors that are now posing a problem.”

Considering the economic setbacks of the small–scale traders, we restrain from going steadfast on them,” he adds. On being asked about the inflow of plastic from other states, he says that special squads will be formed to curb this menace and warns of stringent action against repeat offenders. “The shops will be shut down and sealed if found guilty,” he warns, adding that an illegal plastic manufacturing unit at Ambattur was recently sealed in a joint operation conducted by the TNPCB and Chennai Corporation.

Echoing similar sentiments, a senior food safety official says that more than 50 per cent of restaurants in the city follow the ‘no-plastic’ rule. “Till date, we have seized five and a half tonnes of plastic from the city restaurants,” he adds. A lorry containing five tonnes of banned plastic was also reportedly seized by the officials a month back.

Mr Satyapura Shekar, director of Urban Governance, Citizen Consumer and Civic Action Group, also believes that the Tamil Nadu government has taken a hardline stand on the issue and points out that unlike states like Mahara-shtra, which rolled back the ban within a few months of its implementation, the plastic ban is still being enforced in the state. “The design of the ban on paper is also far more advanced compared to its counterparts, nationally and globally,” she says.

With the civic body busy preparing Chennai for the monsoon ‘deluge’, the frequency of raids has notably come down, which might be another reason for the resurgence of plastic. However, officials believe that with a nationwide initiative on eliminating plastic, the movement to ‘curb the deadly menace of plastic pollution’ will now gain momentum.