Legislators were excited as they spoke during the special 36-hour-long session held to mark the 150th birth anniversary of Mahatma Gandhi. 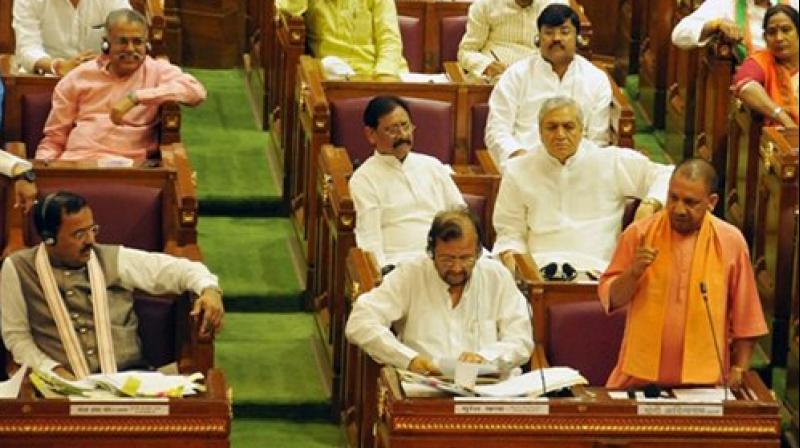 Lucknow: Close to the stroke of the midnight hour, it was business as usual in both Houses of the Uttar Pradesh Legislature.

The legislators were excited as they got to speak during the special 36-hour-long session held to mark the 150th birth anniversary of Mahatma Gandhi.

The Opposition parties, including Samajwadi Party, BSP, Congress and Suheldev Bhartiya Samaj Party, boycotted the proceedings, claiming the state government is just out to set a record.

As one MLA was quickly going through the pages during his speech, Speaker of UP Legislative Assembly Hriday Narayan Dixit asked him as to how many pages were still left. Chief Minister Yogi Adityanath burst into laughter.

Dixit, while urging the MLAs to stick to the stipulated time allotted, said, "We are running late by nearly six hours, and many are interested to speak at midnight."

As the MLAs and ministers were speaking in the House -- close to the stroke of the midnight -- the staff and security personnel of the Vidhan Bhavan were having their dinner, which was served to them in packets.

Sources said around 700 staff and security personnel are on duty, and three canteens of the UP Vidhan Bhavan are running round-the-clock for the special session.

Arrangements have been made to serve lunch, high tea and dinner to the legislators as well as the staff, with special care on serving food to those observing fast in view of the ongoing Navratra.

Outside the House, the Bapu Bhavan, which houses many offices of the UP government, wore an illuminated look, while the sprawling Vidhan Bhavan was buzz with activities as security personnel deployed at various entry points kept a strict vigil on the visitors and passersby.

The special 36-hour session in both the houses of the Uttar Pradesh legislature to celebrate Mahatma Gandhi's 150th birth anniversary began on Wednesday amid a boycott by the Opposition.

Chief Minister Adityanath said Opposition's boycott was not only an "insult" to the Father of the Nation, but also a "contempt" of the House.

Setting the proceedings in motion, Speaker Dixit said such a session was never held in the parliamentary history

"It's unfortunate that opposition leaders, who agreed for the session, are not present. Probably they did not remember that they had given consent for the session," he said. Only members of the ruling BJP and its ally Apna Dal were present.

Earlier in the evening, Congress MLA from Rae Bareli Aditi Singh participated in the special session, defying her party's decision to boycott the event.

Asked about speaking in the House despite the boycott by the Opposition, she said, "If you heard my speech, I only spoke about development and sustainable development goals. I practice politics the way my father used to do it -- whatever I feel is correct, I do it." Singh said she came to the House and participated in discussions as she felt that it was an appropriate thing to do.

When asked if she had deviated from the party line, she said, "I rose above party line and tried to speak on development...This is my first and foremost priority."

To a question of whether the party will initiate action against her, Singh replied, "It is the party's call and whatever decision they will take, I am ready to accept it. I did whatever I felt was appropriate." About any new step she was taking, she said, "For me, the big decision is to work more in the constituency."