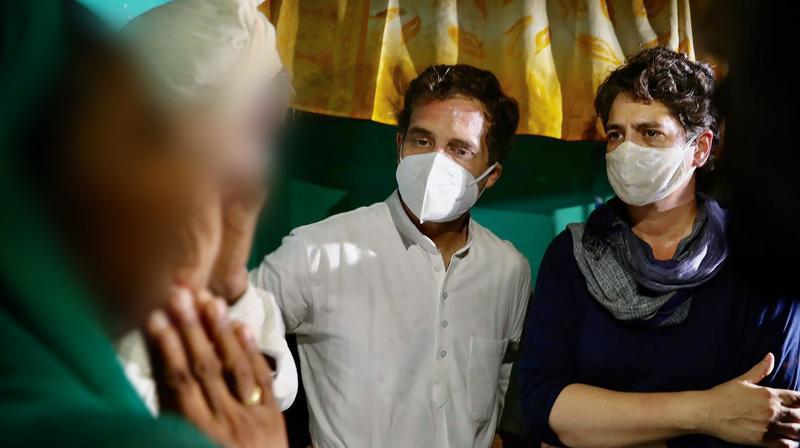 The decision was announced by the Chief Minister's Office minutes after Congress leaders Rahul Gandhi and Priyanka Gandhi Vadra wound up their visit to the home of the victim's family at a village in Hathras district.

Hours earlier, UP Additional Chief Secretary (Home) Awanish Awasthi and Director General of Police H C Awasthi too had travelled from Lucknow to meet the family.

Chief Minister Yogi Adityanath has ordered that a probe should be conducted by the CBI into the entire Hathras episode, the CM's Office said, its tweet capping a day of protests and criticism over the handling of the case by the BJP government in the state.

Later, Adityanath said the state government is seeking an inquiry by the Central Bureau of Investigation for a probe into all aspects linked to the Hathras episode.

We are determined to ensure the harshest punishment for all those responsible for this incident, he tweeted in Hindi.

Reacting to the announcement, the family members of the victim said they want a Supreme Court-monitored inquiry.

The Dalit teen died of her grievous injuries in the early hours of Tuesday at a Delhi hospital, a fortnight after she was attacked. She was cremated in the dead of night near her home on Wednesday. Her family alleged they were forced by local police to hurriedly conduct her last rites.

As they came out of the home of the Hathras victim, Rahul Gandhi and Priyanka Gandhi vowed to fight for justice for the woman.

We will fight against injustice, and fight till justice is done, Priyanka Gandhi told reporters. Rahul Gandhi said no power can stifle the voice of the bereaved family.

The 45-minute meeting ended a standoff between the Congress and the UP authorities, who had had scuttled an earlier attempt by the two leaders to travel to Hathras, detaining them and several party workers in Greater Noida outside Delhi on Thursday.

The Congress staged another demonstration at the Delhi-Noida border on Saturday. Congress workers scuffled with police and were allegedly lathi-charged. The demonstration led to a massive traffic jam on the road leading to Noida.

When a delegation of Congress MPs and other leaders reached the barricades, the Noida police said they will allow five party representatives to meet the family in Hathras, about 150 km away.

Priyanka Gandhi was at the wheel when the two leaders drove towards Hathras. Some other Congress leaders met up with them in Mathura.

The Gandhis were accompanied by KC Venugopal, Adhir Ranjan Chowdhury and Mukul Wasnik, according to UP Congress leader Pradeep Mathur who joined the Congress cavalcade in Mathura.

In Hathras, Additional Chief Secretary (Home) Awanish Awasthi had told reporters that any group with no more than five people" is allowed to meet the victim's family, marking a departure from the last few days when media and politicians, including from the Trinamool Congress, were turned away from the village.

He said orders for the suspension of police personnel, including the superintendent of police, were issued on Friday within two hours of receiving the first report of the Special Investigation Team sent to the village.

"It is an extremely sad incident. We met everyone in the family. We spoke to them and assured them that the strictest action would be taken against all those found guilty, Awasthi said.

"Whatever points and the complaints they have raised, the SIT will note them, and we will make all efforts to ensure that each of them is addressed," he added.

As the Congress delegation from Delhi prepared to make its way to Hathras, its Uttar Pradesh unit president Ajay Kumar Lallu alleged he had been put under house arrest.

Addressing a press conference, the Women and Child Development minister accused the opposition of playing politics on the Hathras issue. "The victim will get justice. I have spoken to the chief minister. Once the SIT submits its report, the chief minister will take action against the accused," Irani said.

In Agra, scores of protesters from the Valmiki community pelted stones at policemen and government vehicles.

Earlier, BSP president Mayawati had demanded a CBI or a Supreme Court-monitored probe into the Hathras episode. "There is tremendous resentment in the entire country over the heinous Hathras gangrape case. The public does not seem satisfied with the initial probe report," she tweeted in Hindi.