Adityanath had set up three-member Special Investigation Team on Wednesday and instructed that it submit its report by October 14. 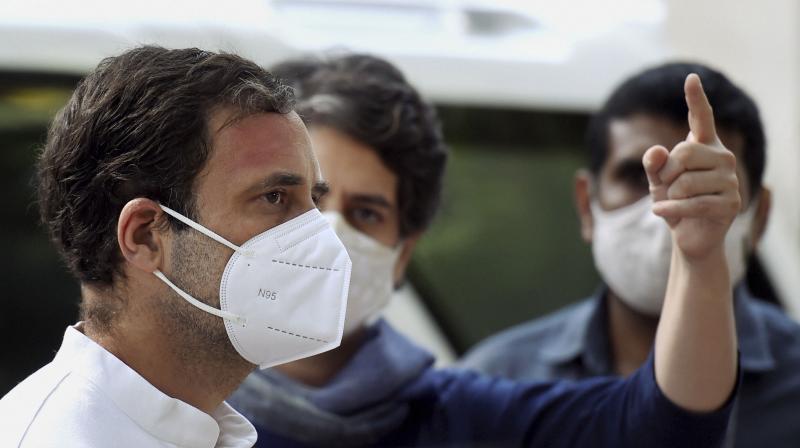 Congress leaders Rahul Gandhi and Priyanka Gandhi leave for Hathras to meet the family of the 19-year-old woman who died after she was assaulted and allegedly gang-raped, in New Delhi, Saturday, Oct. 3, 2020. (PTI Photo)

Hathras/New Delhi: The SIT set up by the Uttar Pradesh government has completed its probe into the death of a 19-year-old Dalit woman who was assaulted and allegedly gangraped, officials said on Saturday as barricades outside her village in Hathras were lifted and the media was allowed in.

All roads it seemed led to Hathras with Chief Minister Yogi Adityanath sending senior officials, including Additional Chief Secretary (home) Awanish Awasthi and Director General of Police HC Awasthy, to the village to meet her family.

Congress leaders Rahul Gandhi and Priyanka Gandhi Vadra, who were detained amid high drama on Thursday, also headed towards Hathras in another effort to meet the family.

There was heavy police deployment on the Delhi-Uttar Pradesh border with barricades on Delhi-Noida Direct (DND) flyway and scores of policemen deployed.

The border is not sealed but checks have been intensified at the Delhi-Noida border, according to a local police officer.

As the Congress delegation from Delhi prepared to make its way to Hathras, about 180 km away, its Uttar Pradesh unit president Ajay Kumar Lallu and more than 500 workers were put under house arrest, the party alleged.

The Dalit teen died of her grievous injuries in the early hours of Tuesday in a Delhi hospital and cremated in the dead of night near her home on Wednesday with her family alleging that they were forced by local police to hurriedly conduct her last rites, triggering outrage nationwide and protests in several places. She was attacked on September 14.

On Thursday, the Hathras administration clamped prohibitory orders barring the assembly of more than four people in the district, where scuffles broke out as politicians, including from the Congress and the TMC, as well as the media tried to access the village. About 300 police personnel stood on guard to prevent anybody from entering.

Today, however, the administration lifted restrictions on the media's entry.

Only the entry of media has been allowed into the village of the victim as the probe of the SIT has completed, Joint Magistrate Prem Prakash Meena told reporters.

Adityanath had set up three-member Special Investigation Team on Wednesday and instructed that it submit its report by October 14.

The state's government's top officials, Awanish Awasthi and police chief HC Awasthy, will meet the woman's family members and submit their report to the chief minister on their return.

After returning from there we will be submitting a report on the entire incident to the chief minister, Awanish Awasthi said.

The death of the young woman, whose brutal assault recalled for many the horrors of the Nirbhaya case, continued to snowball into a major political issue

In a tweet in Hindi using the hashtag 'Hathrashorror', Rahul Gandhi said the behaviour of the UP government and police with the woman and her family "is unacceptable.

The former Congress president asserted that "no power in the world" can stop him from meeting this grieving family in Hathras and sharing their pain.

Hitting out at the Adityanath dispensation, Priyanka Gandhi described the UP government as "morally corrupt" and said, "The victim did not get treatment, her complaint was not registered on time, her body was forcibly cremated, the family is in captivity, they are being suppressed -- now they are being threatened that they will have to undergo a narco test."

The party also alleged that the woman and her family had been denied justice and "severely traumatised" by the BJP government.

BSP president Mayawati demanded a CBI or a Supreme Court monitored probe into the incident and said people were not satisfied with the initial investigations in the matter.

There is tremendous resentment in the entire country over the Hathras heinous gangrape case. The public does not seem satisfied with the initial probe report. Therefore, this matter should be investigated by the CBI or under the supervision of the honourable Supreme Court. This is the demand of the BSP, Mayawati tweeted in Hindi.

Also, the honourable president of the country, who also comes from UP and is a Dalit, it is a strong appeal to him to intervene in this case, keeping in mind the inhuman attitude of the government, to bring justice to the victim family, she added.