Protesters blocked movement of trains on railways tracks and attacked vehicles. Hundreds of bandh supporters were arrested by the police. 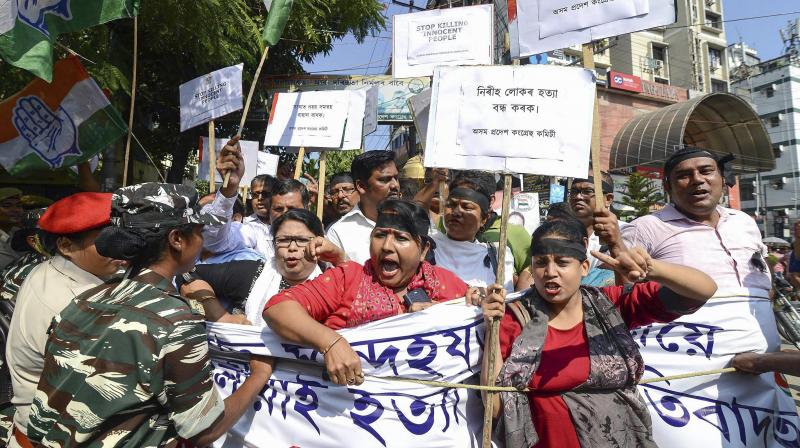 Assam Pradesh Congress Committee (APCC) activists take part in a protest against the killing of innocent people in Tinsukia District of Assam on Friday evening, in front of Rajiv Bhawan in Guwahati. (Photo: PTI)

Guwahati: A statewide 24-hour bandh was observed in Assam on Saturday to protest against the killings of five Bengali-speaking people, allegedly by outlawed Ulfa-I rebels, on Thursday night at Dhola in Tinsukia district.

The bandh was called by the All Assam Bengali Yuba-Chatra Parishad and several other Bengali organizations had supported it.

The bandh had very little impact in the some parts of the Brahmaputra Valley, with life continuing as usual in the capital city of Guwahati. The entire Barak Valley region however was greatly affected, including the districts of Cachar, Karimganj and Hailakandi.

Protesters blocked the movement of trains on railways track at Hojai in the Brahmaputra valley. They attacked vehicles and smashed the glasses of vehicles plying on the highways at Gotonga. Protesters also attacked an ASTC bus in Samaguri.

Police said that there were reports of violence from Koliabor, where protesters attacked a mini truck to enforce the bandh. Stones were pelted on a vehicle carrying a wedding party, in Barpeta Road’s Simaluguri.

Hundreds of bandh supporters were arrested by police all over the state and there were sporadic incidents of clashes in some parts of Assam.

There was no impact of the bandh in the eastern Assam districts including Dibrugarh, Sivasagar, Jorhat and Golaghat where life continued in a regular way during the bandh hours.

In Guwahati, normal life remained unaffected and city buses and other vehicles could be seen plying freely. Cab services like Ola and Uber too plied normally on the city roads.

Most business establishments like shops and markets remained open and government offices, schools and other educational institutions are functioning as usual. Only a few shops in Lalganesh, Maligaon, Kahilipara, and Fancy Bazar areas of Guwahati remained closed.

The Assam government on Friday had issued strict instructions to all the heads of district administrations, education institutions and business houses to defy the call for a bandh and ensure normal functioning of the institutions.