India   All India  03 Nov 2018  New sandbag bunkers come up in Valley amid fears of spurt in violence
India, All India 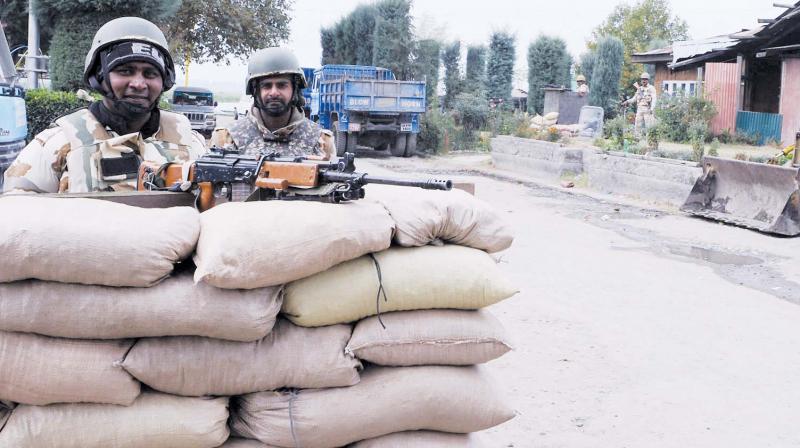 Srinagar: The security scenario of Jammu and Kashmir will continue to be complex and varied as long as militancy exists and the political issues confronting the state remain unresolved. When it comes to fighting the militants, “ups and downs are part of the game”, said a senior police officer.

As the “game” is on,  security across the Kashmir Valley has been stepped up following reports that militants may try to carryout deadly attacks after suffering spectacular reverses and sustaining massive losses in the recent counterinsurgency operations. About 30 militants, including three top commanders, belonging to various outfits were killed in firefights with security forces across the Valley in the October alone. Twelve civilians also died in collateral damage from these encounters and owing to the use of live ammunition by security forces to contain consequent violent protests.

The authorities apprehend spurt in violence in urban areas, including summer capital Srinagar, where close to one and a half dozen additional sandbag bunkers and pillboxes have come up and  security personnel and police sharpshooters have been deployed at these points for quick and proficient exploits when the eventuality arises. A large number of such fortifications had been removed from Srinagar following improvement in security situation about five years ago.

The changing security scenario and exigency prompted the chief of the Army’s northern command Lt. Gen. Ranbir Singh to spend two days in the Valley for threadbare discussions and review of the situation with local army commanders. Accompanied by Srinagar-based Corps Commander Lt. Gen. AK Bhatt, he visited the Army formations and units across the Valley where he was briefed by the commanders on ground about the current situation. Separately, K. Vijay Kumar, advisor on security to governor, closeted with top security forces officers at the police headquarters in Srinagar earlier this week to discuss measures required to combat militant activities more effectively.

In their stepped up activities, the militants killed, at least, three security personnel at different places in the Valley past week. Claiming responsibility for carrying out these attacks, outlawed Jaish-e-Muhammad (JeM) said it has planned more such attacks in coming days. Army Chief General Bipin Rawat said on October 29 that the Army was looking into reports of snipers entering the Kashmir Valley to target forces personnel. Earlier reports had said that the Jaish attacks and threat have forced the security agencies to re-calibrate their strategy to thwart such strikes by the group.

However, the Army Chief was not sure if a group of snipers has really entered the Valley and, if yes, whether it has access to sniper weapons. He told reporters in New Delhi, “Whether these attacks have been done by snipers or not, this is something we are still studying. But to say that snipers have infiltrated and that they have sniper weapons...We have not found any sniper weapon.”

Just a day after General Rawat said that to say snipers have come into the Valley was “premature”, the security officials in Srinagar said that among the two Jaish militants they killed in a gunfight in Tral area of the Valley included Usman Haider who as per a statement and video purportedly shared by the outfit on social media, was heading sniper attacks for quite some time.

Haider, a report said, was the nephew of the Jaish chief Maulana Masood Azhar. “The claim that Haider was part of the group of militants which carried out the recent sniper attacks is corroborated by the fact that an M-4 carbine rifle was found on him after he was killed in the Tral encounter,” said a police officer who spoke on condition of anonymity.

But even after getting some hi-tech equipment,  police believes that militants overall are running short of weapons — a fact borne by a spurt  in incidents of snatching of weapons from cops.

Officials have termed the killing of about 30 militants in a series of operation in October as “major breakthroughs”. They attribute the same to “greater synergy” among various security forces and agencies and “better and specific intelligence inputs”.

It asked Kashmiri people to desist from this activity in order to “save your akhirah (afterlife)”.