Struck by “disbelief” on seeing the Congress campaign, Mr Jabbar may not be off-the-mark in his observation. 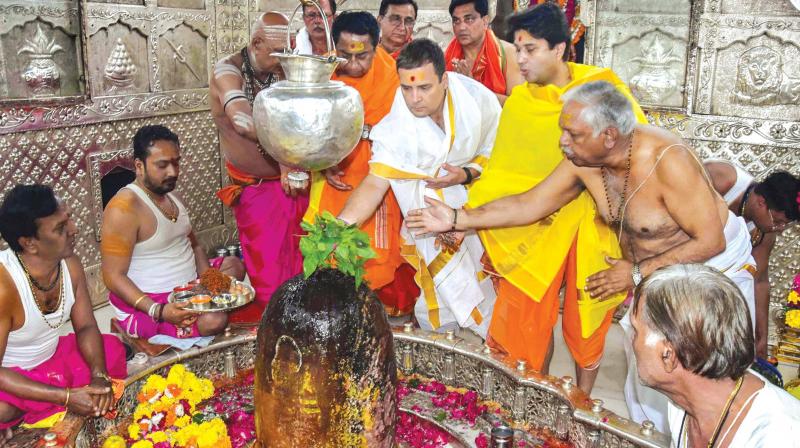 Temple visits by Rahul Gandhi and massive saffronisation by wooing religious and spiritual leaders as part of the Congress poll campaign in Madhya Pradesh ahead of the November 28 Assembly elections have caught the ruling BJP off guard.

Bhopal: Finding itself in a “do or die” situation ahead of the November 28 Assembly elections, the Congress in Madhya Pradesh seems to have “saffronised” its campaign “to the teeth” to counter the ruling BJP which, as always, is pushing the Hindutva agenda.

The grand-old party, out of power in MP since 2003, appears to have even outsmarted the BJP which, as it is widely perceived, has perfected the art of painting  its electioneering with religious colour in a subtle manner and by playing the religion card to the hilt.

“The Congress appears more saffronised than the BJP today,” said 75-year-old social activist Abdul Jabbar, who has literally waged a lone battle to ensure justice to victims of Bhopal gas tragedy of 1984 in last four decades.

Struck by “disbelief” on seeing the Congress campaign, Mr Jabbar may not be off-the-mark in his observation.

The way Congress president Rahul Gandhi performed “kanya pujan”, a typical ritual carried out by Hindus in the Hindi belt to exhibit reverence for girl children, before sounding the poll bugle for his party in Bhopal on September 25, was a big indication of the grand old party challenging the BJP in its own game.

Amid chanting of Swosti Bachhans, hymns recited specifically for the ritual wishing welfare of society, and sholkas by 21 Sanskrit scholars, Mr Gandhi paid his respect to the girl children, decorated elaborately for the occasion.

The celebration was also marked by blowing of conches by 21 performing artists, a ritual observed by Hindus before initiating a major event.

Needless to mention, Mr Gandhi continued his temple run in Bhopal, a purported tactical move conceived by the party to shed the minority appeasement tag attached to it.

His subsequent visits to other parts of the state were marked, without exception, by at least a 30-minute stay in an important place of worship of Hindus in the respective areas.

His “dates with deities” in MP during the period included Mahakal in district headquarters of Ujjain that is revered highly by Hindus as one of 12 Jyotirlingas (symbolizing Lord Shiva) in the country, Peetambar Peeth in district headquarters town of Datia whose deity is perceived to bail out politician devotees in distress, and Kamtaji temple in Chitrakoot in Satna district which is the mythological abode of Lord Ram during his exile.

The “aarti” ritual he performed at the bank of the Narmada in Jabalpur during his recent visit to Maha Koshal region was widely viewed as the “icing on the cake” on the heavily saffronised campaign of the party.

Mr Gandhi had “religiously” followed the dress codes of these famous shrines while paying obeisance to their respective presiding deities.

“He was seen completely drowned in devotion towards the deities during his visits to the temples,” Congress spokesman Pankaj Chaturvedy, who was among the party leaders who had accompanied Mr Gandhi to some places of worships in MP, told this newspaper.

Mr Gandhi was projected as “Ram Bhakt”and “Shiv Bhakt” in the respective places having mythological links to Lord Ram and Lord Shiva.

As per the Congress strategy, party insiders say, panchayat, block and state-level leaders have been instructed to use every available opportunity to visit temples in their respective areas before undertaking a party programme to project themselves as staunch Hindus.

Influential religious and spiritual leaders in different parts of the state are also being wooed by the party.

The Congress has also declared to build the “Ram Gaman Path”, a mythological route in Chitrakoot traced by Lord Rama, his spouse Sita and sibling Laxman, during their exile.

The BJP had caught the imagination of people in the Vindya region of the state, comprising 31 Assembly constituencies, in 2008 by promising to establish a religous tourism circuit, but it is yet to materialise.

Though shaken by the Congress’ saffron strategy, the ruling BJP, in public, calls it a sign of “bankruptcy of ideas”.

“That Congress seeks to play religion card to the hilt in polls is a clear indication that they have no issues. It is a sign of anxiety and frustration in the Congress over the prospect of losing Assembly elections,” said a BJP leader.

The Congress has also used the “gau mata” (revered cow) to woo rural voters, a strategy that was till now considered a trademark of the BJP. State Congress chief Kamal Nath has vowed to build “gaushala” or cow sheds in each of the 23,600 panchayats in the state.

At another poll rally, Mr Nath said, “I will build idols of Lord Hanuman as gigantic as that built by me in Chhindwara (his parliamentary constituency).”