Emerging from the meeting, Yadav told reporters, 'I stand by my decision. A person can't live stiflingly (ghut ghut kar)'. 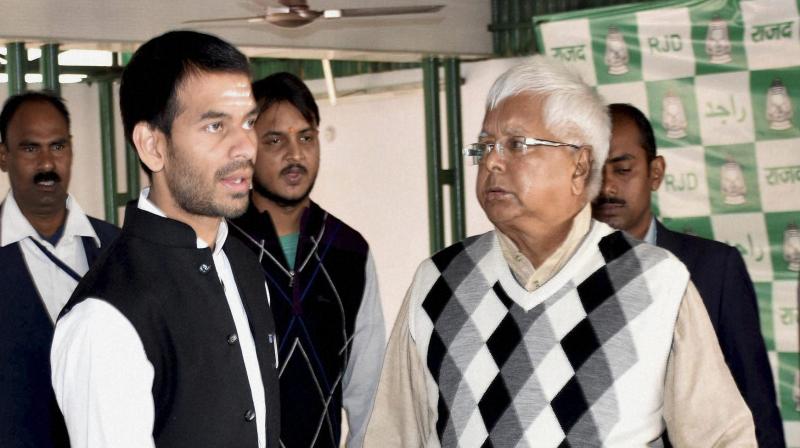 Yadav had married Aishwarya Rai, the daughter of former minister Chandrika Rai, on May 12 last in Patna. (Photo: File | PTI)

Ranchi: A distressed Tej Pratap Yadav met his incarcerated father Lalu Prasad here on Saturday and reaffirmed that he stood by his decision to part ways with his wife barely six months after their marriage.

A day after filing a divorce petition in a Patna civil court, Yadav, an RJD leader and former minister, travelled by road to Ranchi and met Prasad for over two hours at Rajendra Institute of Medical Sciences (RIMS) where he is lodged in custody in connection with fodder scam cases.

Emerging from the meeting, Yadav told reporters, "I stand by my decision. A person can't live stiflingly (ghut ghut kar)".

Yadav married Aishwarya Rai, daughter of former minister Chandrika Rai, on May 12 last in Patna. He, however, did not reveal what he talked about with his father, saying "we will discuss with our family members about it. But I remain firm on my decision of filing the divorce petition."

To questions of journalists, he said, "I will tell whatever I have to say in the court when the matter will come up for hearing on (November) 29 and I don't feel like sharing it with you."

Earlier in the day, a team of doctors checked Prasad and told reporters that everything is normal.
A diabetic, Prasad is suffering from various ailments and is kept in paying ward of RIMS under supervision of doctors.

After filing divorce complaint invoking Section 13 A of the Hindu Marriage Act under which either spouse can unilaterally seek divorce, Yadav on Friday evening itself had rushed to the Patna airport to fly to Ranchi to meet Prasad, but returned to the residence of his mother Rabri Devi on being persuaded by close family members.