The state government on Saturday approved Rs 10,000 crore as a special provision for immediate assistance to farmers. 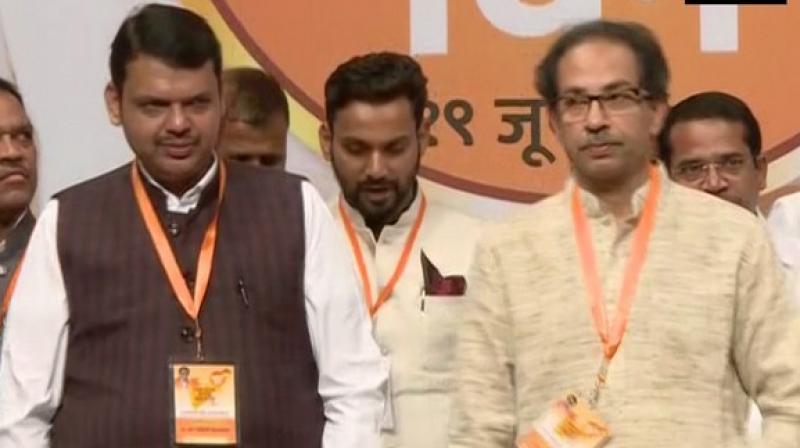 Fadnavis is in Akola on Sunday to meet farmers and review the crop damage caused in the district due to untimely rains. Thackeray is touring Aurangabad district on Sunday where he will take stock of the crop losses. (Photo: File | ANI)

Mumbai: Even as government formation in Maharashtra is in a limbo, Chief Minister Devendra Fadnavis and Shiv Sena president Uddhav Thackeray are touring parts of the state which suffered crop damage due to unseasonal rains last month.

Fadnavis is in Akola on Sunday to meet farmers and review the crop damage caused in the district due to untimely rains, an official in the Chief Minister's Office (CMO) said.

Thackeray is touring Aurangabad district on Sunday where he will take stock of the crop losses in Kannad and Vaijapur talukas, a statement by the Sena said.

The state government on Saturday approved Rs 10,000 crore as a special provision to provide immediate assistance to farmers affected by unseasonal rains.

Crops like jowar, paddy, cotton, maize, tur and soyabean on 54.22 lakh hectares spread across 325 talukas in some districts have been damaged, Fadnavis said after a review meeting on Friday.

During a Cabinet sub-committee meeting on Saturday, Fadnavis directed the officials concerned to review the ground situation in their respective areas and finalise details of the assistance to be provided.

The state witnessed unprecedented post monsoon showers this year, especially due to cyclones in the Arabian Sea.

Most of the crop damage due to untimely showers was caused in the second and third weeks of October.

The opposition Congress earlier dubbed the provision of Rs 10,000 crore for farmers as a "mere eyewash", while NCP leader Ajit Pawar said it was "inadequate" and that the BJP and Shiv Sena should come together and form government to provide relief to farmers hit by untimely rains.

The BJP and its ally Shiv Sena are currently at loggerheads over sharing of power in the new government.

There was also speculation that the Shiv Sena may join hands with the NCP and form government with outside support from the Congress.

Some state Congress leaders have said the party should back the Sena to keep the BJP out of power. In the last month's polls to 288-member state Assembly, the BJP won 105 seats, Shiv Sena-56, NCP-54 and Congress-44.