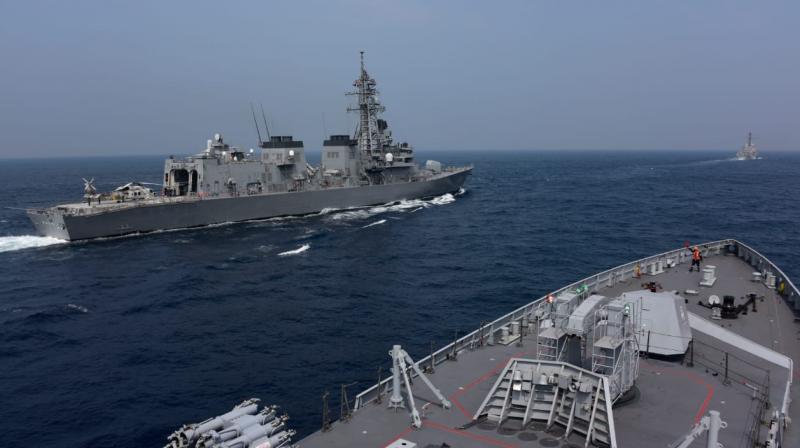 Scenes from the Malabar exercise

New Delhi: India and three other "Quad" countries -- US, Japan and Australia -- on Tuesday started the "Malabar" naval exercise in Bay of Bengal even as China confirmed to another round of Corps Commanders meeting on Ladakh standoff and a mutual agreeable date is being worked out.

While India is trying to peacefully resolve the six month military stand-off with China through negotiations, it is also forming up strategic alliances with other nations. This is reflected by India's invitation to Australia to participate in the Malabar Naval exercise and signing Basic Exchange and Cooperation Agreement for Geo-spatial Cooperation (BECA) with US last week. This is a signal to China that India will not bow down to any pressure, even as it wants peace in the region.

India, US, Japan and Australia are part of the “Quad" alliance, which Beijing considers as an anti-China grouping.

While Australia wanted to be part of the Malabar exercise for some time now, India had been hesitant to invite it to avoid any angry reaction from China.

During the 7th round of Corps Commanders meeting, India and China on October 12 had agreed not to turn differences into disputes and jointly safeguard peace and tranquility in the border areas. Both sides had agreed to maintain dialogue and communication through military and diplomatic channels and arrive at a mutually acceptable solution for disengagement as early as possible.

Indian and Chinese armies are now preparing to keep troops in forward positions during winter in Ladakh. As per reports, Indian Army has received the initial consignment of extreme cold weather clothing from the USA for its troops deployed on the China border.

It said that the Indian Army maintains a stock of 60,000 of these extreme cold weather clothing sets for troops deployed in entire Ladakh including both western fronts in Siachen and Eastern Ladakh sector. This year, there was an additional requirement of around 30,000 sets as close to 90,000 troops are deployed in the region.