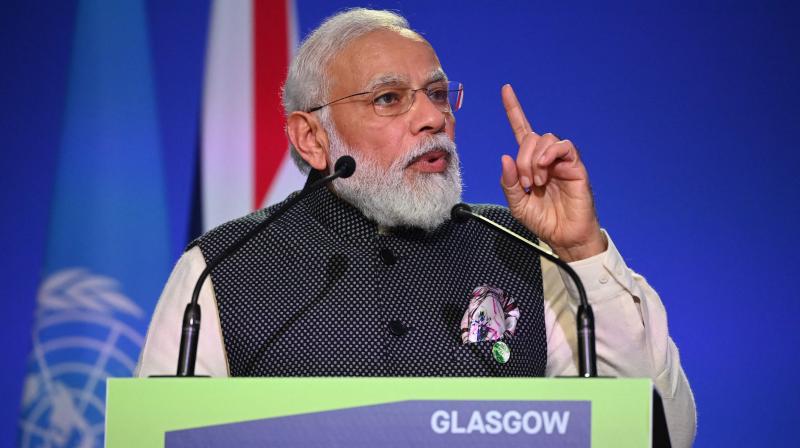 New Delhi: On his second and final day of engagements at the COP26 summit in Glasgow, Scotland, Prime Minister Narendra Modi on Tuesday evening announced that the Indian Space Research Organisation (Isro) would “present a solar calculator application to the world” and that “with this calculator, the solar power potential of any place in the world can be measured based on satellite data”. He said this “application will be useful in deciding the location of solar projects and will strengthen the concept of ‘One Sun, One World, One Grid’ with the cooperation of both the International Solar Alliance (ISA) and host UK’s Green Grid Initiative”. Mr Modi was speaking at the leader level event – “Accelerating Clean Technology Innovation and Deployment”. India, under the leadership of Mr Modi, was one of the pioneers of the ISA.

This was not the only initiative by Isro announced by Mr Modi. Earlier on Tuesday, speaking at the launch of the “Infrastructure for Resilient Island State”, or IRIS, Mr Modi announced another new initiative from India in which he said Isro would “build a special data window for ‘Small Island Developing States’ (SIDS)”, through which SIDS would “receive timely information about cyclones, coral-reef monitoring, coastline monitoring, etc through satellites”. Mr Modi was thanked for his efforts by leaders of island nations such as Mauritius, Jamaica and Fiji.

Giving details about the “One Sun, One World, One Grid” concept at a briefing late Tuesday evening, foreign secretary Harsh Vardhan Shringla said it involved a “single blueprint of inter-connected grids” comprising solar and wind energy and that it would help in “building cross-border long-distance transmission lines to connect renewable energy generators”. The FS also said it would “help support transmission to zero-emission vehicles” and also solar mini-grids. Mr Shringla said there was a “clear conviction in the political leadership” in India that “we need to do what it takes”.

Mr Modi also participated during the day in an event hosted by US President Joe Biden on “Build Back a Better World”, in which he spoke about the need for adequate climate finance and for projects to respect the “territorial integrity of nations”.

Excellencies, the industrial revolution was fuelled by fossil fuels. Many countries have prospered by the use of fossil fuels, but our earth, our environment, have become poor. The race for fossil fuels also created geo-political tensions. But today technology has given us a great alternative.”

Mr Modi further said: “In the Surya Upanishad, thousands of years ago, it was said (Suryaad bhavanti bhutani, suryen palitani tu) … In other words, everything has originated from the Sun, the source of all energy is the Sun, and everything is sustained by the energy of the Sun… But in the modern era, man in the race to overtake the cycle set by the Sun has …. disturbed the natural balance, and caused great damage to his environment. If we are to re-establish a balanced life with nature, the path of this will be illuminated by our Sun. We have to walk along with the Sun again to save the future of humanity.”

Mr Modi added: “The quantum of energy that the entire human race consumes in a year… the Sun gives the same amount of energy to the earth in one hour. And this enormous energy is completely clean, sustainable. The only challenge is that solar energy is available only during the day and is also weather dependent. ‘One Sun, One World, One Grid’ is a solution to this challenge. Clean energy from a worldwide grid will be available everywhere at all times. This will also reduce the need for storage and increase the viability of solar projects. This creative initiative will not only reduce the carbon footprint and cost of energy, but will also open a new avenue of cooperation between different regions and countries. I am confident that the synergy of One Sun: One World: One Grid and Green Grid Initiatives will lead to the development of a cohesive and robust global grid.”

Speaking earlier in the day, Mr Modi said that “both the Coalition for Disaster Resilient Infrastructure (CDRI) and SIDS have worked together to realise IRIS -- a good example of co-creation and co-benefits”. He added: “That’s why I consider the launch of IRIS today very important. Through IRIS, it will be easy and faster for SIDS to mobilise technology, finance, and necessary information. Promotion of quality infrastructure in small island states will benefit both lives and livelihoods there. I have said earlier that the world considers these countries as low-population small islands, but I see these countries as Large Ocean States of great potential. Just as a garland of pearls from the sea adorns everyone, so the sea-bound SIDS adorns the world.”