The two-phase Gujarat assembly elections will take place on December 9 and 14, while the results will be out on December 18. 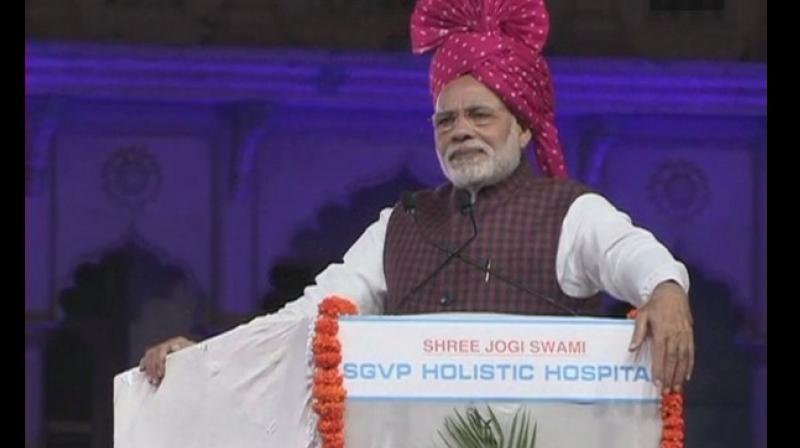 Modi said that Bharuch and Kutch are districts with significant Muslim populations which developed rapidly under the BJP tenure in Gujarat and the names of these two districts have figured prominently. (Photo: ANI | Twitter)

Rajkot: Prime Minister Narendra Modi on Sunday launched a scathing attack on the Congress by accusing the opposition party of dividing society on the lines of caste and religion.

“Be it corruption, casteism, communalism or nepotism, it is the Congress which is associated with these evils. The youth are not ready to accept the Congress,” Modi said while addressing a rally in Rajkot.

He said the "progress of Gujarat under BJP has been better than under previous Congress governments in the state" in every indicator "be it health, education, agriculture".

Earlier on Sunday, speaking at a public rally in Bharuch, Modi said that the Congress oppose the Government just for the sake of opposing.

The Prime Minister said, "My problem with Congress politics is simple - they oppose us just for the sake of opposing. They oppose things like bullet train only because they could not take this initiative forward and are envious someone else is".

Taking a jibe at the UPA government, Modi said, "Do you remember the poor law and order situation in Bharuch when Congress was in power? Curfews and violence were common here. BJP changed this, not only in Bharuch but all over Gujarat".

He added that Bharuch and Kutch are districts with significant Muslim populations which developed rapidly under the BJP tenure in Gujarat and the names of these two districts have figured prominently.

"In Uttar Pradesh, where Congress has ruled for decades, the state from where generations of top Congress leaders belong, we saw what happened there in the local elections. Congress was wiped out. Uttar Pradesh knows Congress well and so does Gujarat," Prime Minister Modi said.

He added that when there were floods in Gujarat's Banaskantha, the Congress leaders were in Bengaluru to save one leader (Rahul Gandhi) from losing a Rajya Sabha poll.

"That same leader is the topmost Congress leader now but what did he do for Bharuch? He was unable to work for Narmada, neither did he think about Ro-Ro ferry," the Prime Minister asserted.

He further said that the curfews and violence were common in Bharuch when the Congress was in power, adding, "BJP changed this, not only in Bharuch but all over Gujarat".

Sharpening his attack on the Congress, Modi accused the opposition party of seeking to divide society on the basis of caste and religion.

Modi lashed out at the Congress, saying that it wanted to create "walls between brothers".

"The people of Gujarat know what the Congress is up to. It changes colour time and again, creates a wall between brothers," he said.

Modi said the party made "one caste fight with the other, one religion fight with another".

"They keep you busy in fighting with each other. You may die but the Congress will eat 'malai' (cream)," he said.

A political slugfest has erupted ahead of the elections, as the Congress is continuously attacking the BJP and vice-e-versa on several issues like development in Gujarat, the demonestisation, the Goods and Service Tax (GST) etc.

The two-phase Gujarat assembly elections will take place on December 9 and 14, while the results will be out on December 18.