India   All India  03 Dec 2017  Knives out for Akhilesh Yadav after UP civic poll fiasco
India, All India

Knives out for Akhilesh Yadav after UP civic poll fiasco 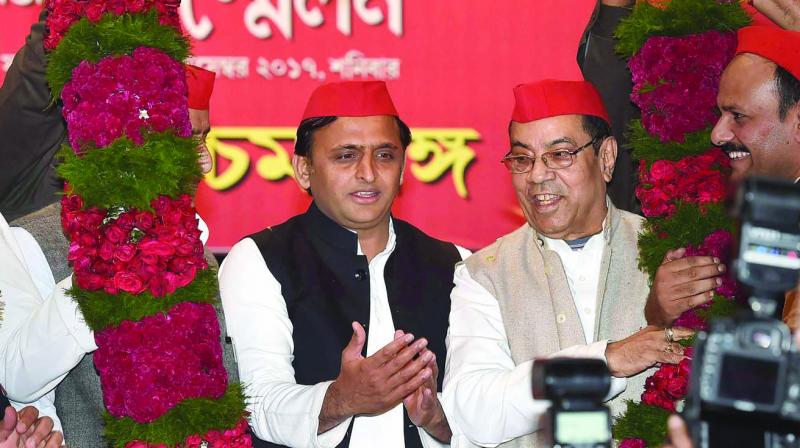 Former UP CM Akhilesh Yadav at a function in Kolkata on Saturday. (Photo: PTI)

Lucknow/Kolkata: After being voted out of power earlier this year, the Samajwadi Party has again touched rock bottom in the just-concluded municipal elections. A look at the final tally of results shows that SP candidates lost their deposits in nine out of 16 seats for the mayor’s post.

These include Samajwadi bastion Ferozabad, Saharanpur, Moradabad, Mathura Jhansi, Aligarh, Kanpur, Ghaziabad and Agra. Among these constituencies, Saharanpur and Moradabad have a sizeable Muslim population and the fact that SP candidates in these two districts forfeited their deposits indicates that Muslims are moving away from SP. The BJP won both the seats.

Party leaders, who spoke on condition of anonymity, squarely blamed party president Akhilesh Yadav for the party’s defeat in municipal elections. An SP MLA said, “Akhilesh Yadav is surrounded by a coterie of leaders who have no ground support and they are giving him wrong advice. If the party president refuses to campaign for his candidates, what message is he sending out?  Moreover, none of the senior leaders were asked to campaign and the candidates were left on their own.”

Interestingly, Mulayam Singh Yadav did not campaign for the party and neither did Shivpal Yadav. In fact, Shivpal Yadav openly supported an independent candidate Sunil Jolly for the Jaswantnagar Palika Parishad seat and ensured his victory. Sunil Jolly was in SP, but had been denied a ticket by Akhilesh Yadav.

Another SP legislator said that the party’s defeat in districts represented by top leaders should be debated upon. “The family war has already taken its toll on the morale of party workers and then the indifferent attitude of party president has worsened the situation. The selection of candidates was also arbitrary and none of the party workers knew who Meera Vardhan was (candidate for Lucknow mayor) or when she joined the party.”

The MLAs want the party leadership to “actively discuss” the party’s health with the workers and take steps to revive itself. “If the party continues to remains in a state of slumber, we have no hope for 2019 general elections. Akhilesh Yadav should consult the senior party leaders and not just rely on his coterie,” said a former SP minister. State SP president Naresh Uttam blamed the ‘misuse of state machinery’ for the BJP’s victory.

Akhilesh Yadav, who was in Kolkata on Saturday referred to the party’s dismal performance in the UP civic polls and said that the party had won where the elections were held using EVMs, but did not do well where polls were held by using ballot paper. “BJP has bagged 46 per cent votes in places where elections were held using EVM and only 15 per cent votes where the polls were held through ballot paper,” he said, adding that the BJP had won the UP Assembly polls with two-third majority but in the civic polls it had failed to win in the same manner. He also said that the BJP was misleading the country by claiming that the “entire entire state has been painted in the BJP’s colours”