India   All India  03 Dec 2018  If Adityanath was educated, he would know Nizam didn't leave Hyderabad: Owaisi
India, All India

If Adityanath was educated, he would know Nizam didn't leave Hyderabad: Owaisi

Owaisi said Adityanath is less concerned about Uttar Pradesh and is trying to spread hatred in Telangana ahead of polls. 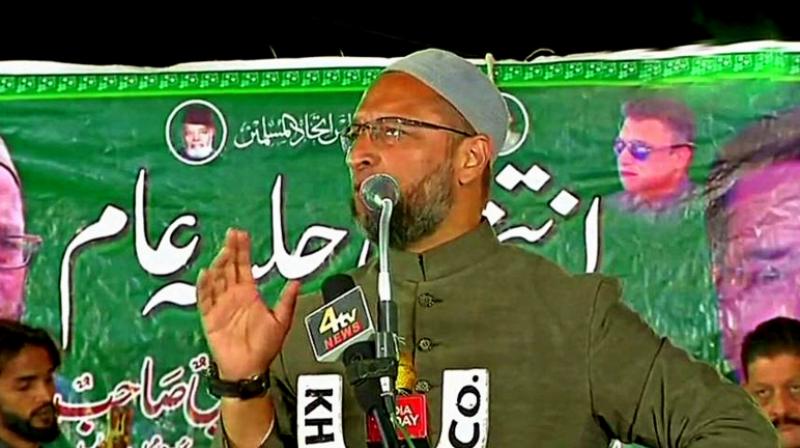 'Amit Shah, please tell what have you done in India in the last four and a half years? Is there something that you wanted to do, but could not?' AIMIM chief Asaduddin Owaisi said. (Photo: ANI)

Hyderabad: Hitting back at Uttar Pradesh Chief Minister Yogi Adityanath, All India Majlis-e-Ittehad-ul Muslimeen (AIMIM) chief Asaduddin Owaisi on Sunday said that the former is less concerned about his state and is trying to spread hatred in Telangana ahead of assembly elections.

Speaking at a rally in Malakpet, Owaisi said, "Bharatiya Janata Party's model is 'Hindu-Muslim'. Their model is that Amit Shah comes to various events and only speaks about Asaduddin Owaisi and AIMIM as he does not have anything else to say. Amit Shah, please tell what have you done in India in the last four and a half years? Is there something that you wanted to do, but could not?"

He added, "Their Uttar Pradesh Chief Minister has come to Hyderabad. He is saying that if BJP will form the government in Telangana then they will throw Asaduddin Owaisi out like Nizam. I want to ask him since when did he start talking all this? Does this nation only belong to you and not me? Will they throw us out of this country if we speak against BJP, Prime Minister Narendra Modi, criticise his politics and talk against Rashtriya Swayamsevak Sangh?"

Further criticising Adityanath, Owaisi said, "You are zero in history and don't know dates. If you can't read then ask somebody who can. If you were educated, then you would have known that Nizam didn't leave Hyderabad. When India fought against China, then he was the one who sold his gold."

Owaisi's statement came after Yogi Adityanath earlier on Sunday said that if the BJP comes to power in Telangana, then Owaisi will have to flee from the state as Nizam left Hyderabad.

Also Read: If BJP forms govt in T'gana, Asaduddin Owaisi will have to flee from Hyd: UP CM

Addressing an election rally at Tandur, Vikarabad in Telangana, Adityanath said, "If BJP comes to power in Telangana, I assure you Owaisi will have to flee from Telangana the same way as Nizam was forced to flee from Hyderabad. BJP will give security to all but will not allow anyone to create anarchy."

Telangana Assembly elections are scheduled for December 7 while the counting of votes will take place on December 11.