BJP was agitating in front of the secretariat, Congress-led UDF MLAs were observing a 'Satyagraha' at the Assembly 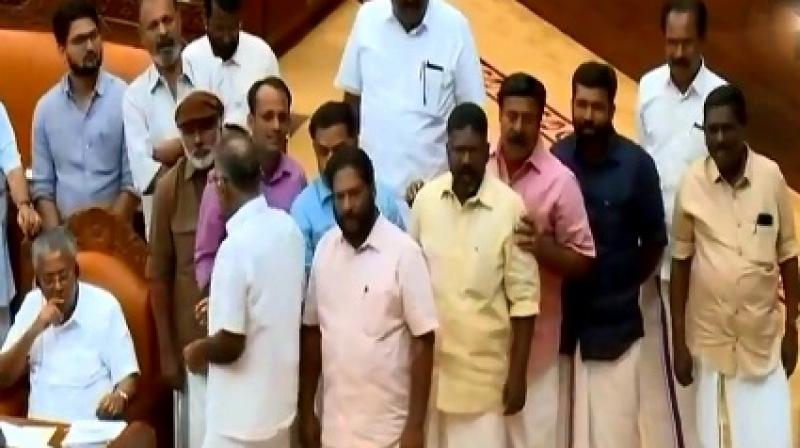 'This is a collusion between the Congress and BJP-RSS and a belated awakening,' Kerala CM Vijayan said. (Photo: ANI)

Thiruvananthapuram: Kerala Chief Minister Pinarayi Vijayan and Leader of the Opposition Ramesh Chennithala were Monday involved in a war of words in the state assembly over the Sabarimala Temple issue, leading to disruption of House proceedings for the fourth day.

Three UDF MLAs also began an indefinite 'Satyagraha' at the entrance of the House on the issue. As the war of words continued and Congress-led Opposition UDF MLAs began shouting slogans, the House was adjourned for the fourth day by Speaker P Sreeramakrishann.

Unlike previous days, the House even saw CPI(M)-led LDF members standing up from their seats and locking horns with opposition members, prompting the Speaker to warn both sides.

As soon as the Question Hour began, Chennithala informed the Speaker that the opposition was ready to cooperate in conducting House proceedings. He said three MLAs-V S Sivakumar (Congress), Parakkal Abdullah (IUML) and N Jayaraj (KC-M)-will observe an indefinite 'Satyagraha' at the portals of the Assembly as the government had not withdrawn prohibitory orders at Sabarimala and also demanding more facilities for pilgrims.

The chief minister said he had thought the opposition would make such an announcement earlier itself in the light of the BJP having decided to shift its agitation in front of the Secretariat from Monday.

"This is a collusion between the Congress and BJP-RSS and a belated awakening," Vijayan said.

While the BJP was agitating in front of the secretariat, the Congress-led UDF MLAs were observing a 'Satyagraha' at the Assembly, he said.

Taking a dig at the UDF, Vijayan even said they were following the stand taken by BJP chief Amit Shah rather than that of their leader Rahul Gandhi on the Sabarimala issue.

Hitting back at Vijayan, Chennithala said the opposition does not need the chief minister's permission to decide when to launch their agitation. He alleged RSS leader Valsan Thillankeri had been "given charge of the home department" at Sabarimala to control the frenzied devotees last month when a 52-year-old woman was attacked at the hill shrine.

The leader also alleged an RSS outfit had been given charge of "Annadanam", the free meal scheme at Sabarimala and C P Sugathan, who had protested against entry of young women, had been made joint convener of the 'Women's Wall', planned by the LDF government on January 1.

Stung by the chief minister's allegations, opposition members trooped to the well of the House and placed a black banner in front of the Speaker's dais blocking his vision.

#WATCH: The opposition protests in Kerala state assembly over the matter of #Sabarimala. The assembly has been adjourned for the day, following the protest. #Kerala pic.twitter.com/GfBgokHFim

As they did not heed to the Speaker's repeated requests to go back to their seats and continued to raise slogans against the chief minister, some angry members of the treasury bench even attempted to move to the well of the House but were dissuaded from doing so by the other ruling Front members. An angry Speaker hurriedly scrapped the submission and calling attention motions, took up other businesses and adjourned the House for the day within 21 minutes.

Opposition members later moved out of the assembly hall raising slogans. The three MLAs later began the indefinite 'Satyagraha' at the portals of the assembly demanding the withdrawal of prohibitory orders and other restrictions imposed by the police in and around the Lord Ayyappa temple in Sabarimala.

Chennithala later told reporters the chief minister had allegedly passed on a chit to the Speaker asking him to stop the House proceedings to prevent the opposition from raising nepotism charges against local administration minister K T Jaleel.

The hill shrine of Lord Ayyappa has been witnessing protests by devotees and right-wing activists against the CPI(M)-led LDF government's decision to implement the Supreme Court's September 28 verdict permitting women of all age groups to offer prayers at the temple.