India   All India  04 Jan 2021  Government hopes 7th round of talks will end on positive note today
India, All India 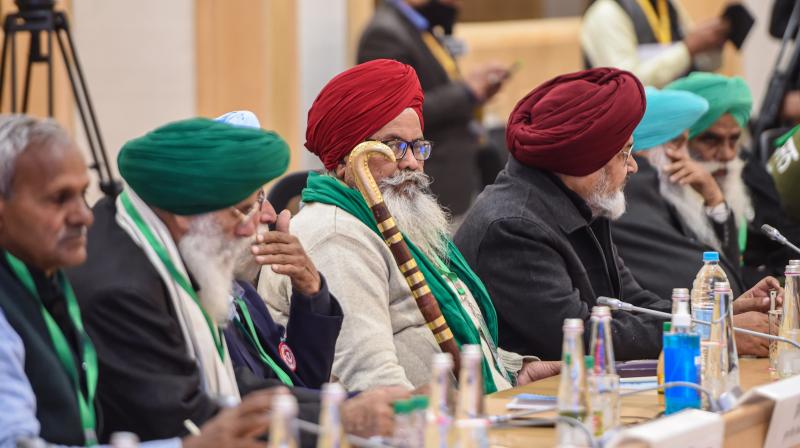 New Delhi: A day before the next round of talks with the farmers’ unions, Union minister of state for agriculture Kailash Choudhary on Sunday expressed hope that a solution will be found at the talks and their agitation over the three agricultural reform laws may end. He also accused the Congress and other Opposition parties of “adding fuel to the fire” in the agitation that has been continuing for over a month at different borders of Delhi.

Mr Choudhary said: “We are talking to farmers who are protesting. We are hopeful that there will be a positive result out of the talks which will be held tomorrow… The Congress, AAP and Communists are adding fuel to the fire. They will not succeed. We hope their issues will be resolved and the protests too may end tomorrow.”

Despite the heavy rains and biting cold across North India, thousands of farmers continued their protests on Day 37 on Sunday on the Delhi borders. The protesters reiterated if their demands for a legal guarantee for Minimum Support Price (MSP) and repeal of the new laws were not accepted during the seventh round of talks, they will further intensify the agitation from Wednesday.

Congress president Sonia Gandhi, meanwhile, claimed over 50 farmers have lost their lives due to the government’s harsh attitude towards the protests. “Some have even committed suicide. Neither has their decision moved the Narendra Modi government or any of its ministers, nor have they uttered a word of consolation,” she added.

Congress’ Rahul Gandhi said every farmer-labourer was a “satyagrahi” and compared their month-long fight against the laws to the Champaran movement during British rule, saying the farmers will take their rights back. He tweeted in Hindi: “The country is going to face a Champaran-like tragedy. The British were ‘Company Bahadur’ back then… and now Modi-friends are ‘Company Bahadur’ … But every farmer-labourer of the movement is a ‘satyagrahi’ who will take back their rights.” The 1917 Champaran satyagraha was led by Mahatma Gandhi and is considered a historic event in India’s independence movement.

Attacking Mrs Gandhi, Mr Choudhary said: “In the Congress manifesto, they said they will bring these laws once they come to power. We did the same. These laws give freedom to farmers.”

He added: “The Narendra Modi government takes decisions in the interests of farmers and stands with them in their problems. Rahul Gandhi is doing politics (on these laws) and is provoking farmers. Why does he forget that he did not go to meet Anna Hazare in 2011 during his government and the way he forced Baba Ramdev to run from a protest site? These people are talking about justice and injustice. The Narendra Modi government stands with farmers to resolve their issues.”

After the sixth round of formal talks last Wednesday, the government and farmers’ unions reached some common ground to resolve the protesting farmers’ concerns over the hike in power tariff and penalties for stubble burning, but the two sides were deadlocked over the repeal of three farm laws and legal guarantee for MSP.

At the Singhu border, the farmers said they were living on the streets in harsh weather conditions away from their families as they were hopeful that the government would sooner or later accept their demands. Far from shivering and quivering, some protesters were seen bare-chested, raising slogans like “Jai Jawan, Jai Kisan”.

Sunday’s continuous downpour also led to waterlogging at some protest venues. Sankyukt Kisan Morcha member Abhimanyu Kohar said farmers have waterproof tents, but these can’t protect them from the biting cold and waterlogging. “The situation is very bad at the protest sites due to rain which has caused waterlogging. It is so cold after the rains, but the government is not able to see our misery,” he said.

Another farmer said there was waterlogging at some places as civic facilities were not up to the mark. However, he asserted that the weather will not dampen the spirit of farmers who have been protesting for over a month. “Despite several problems, we will not move from here until our demands are met,” he said.

Veerpal Singh, a protesting farmer, said the blankets, clothes and wood were soaked due to waterlogging. “We are also facing difficulties cooking food as the rainwater has also soaked firewood. We have an LPG cylinder but not everyone here has it,” he added.