It is the extreme point of the Line of Actual Control, the border between India and China and India’s northernmost build-up area. 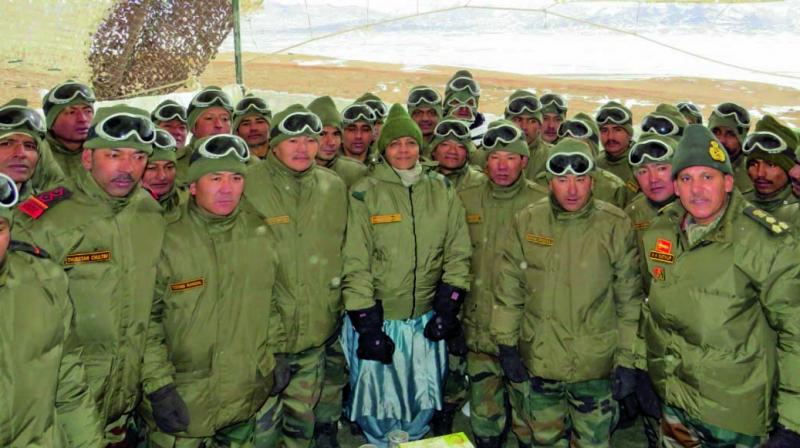 Defence minister Nirmala Sitharaman poses with soldiers for a group photo after arriving at Thoise.

Srinagar: Defence minister Nirmala Sitharaman on Saturday visited Daulat Beg Oldie, the world’s highest airfield, situated at a height of 16,700 feet in eastern Ladakh, to interact with the Indian troops. Temperature plummets as low as -55°C in winters in the area.

A defence spokesman here said that the defence minister had earlier arrived at Thoise, a base-camp of the Indian Army along the India-China border, where she was briefed on the operational preparedness by the officers of the Army.

Lt. Gen. Devraj Anbu, the Commander of Army’s Northern Command and the Corps Commander of the Ladakh Corps accompanied her during the visit.

“While interacting with the troops, the Defence Minister complimented them on their steadfastness and dedication despite the harsh climate and terrain. Her visit has further boosted the morale of the troops deployed at these extremely difficult snow-covered locations in Ladakh,” a statement issued by the Northern Command said.

Daulat Beg Oldie is located near the easternmost point of the Karakoram Range in the cold desert of Ladakh and just 8 km south of the Chinese border and 9 km northwest of the Aksai Chin.

It is the extreme point of the Line of Actual Control, the border between India and China and India’s northernmost build-up area.

The Indian Army maintains helipads and a gravel airstrip here. It is also one of the five officially agreed ‘Border Personnel Meeting (BPM) points between the Indian Army and the People’s Liberation Army of China. The place is named after Daulat Beg, a 16th-century Yarkandi nobleman who is supposed to have died at this place after descent from the Karakoram Pass, which is 17 km to the northwest on the Indo-Chinese border.