Locals suspect that some miscreants set fire after the crude oil came into the river. 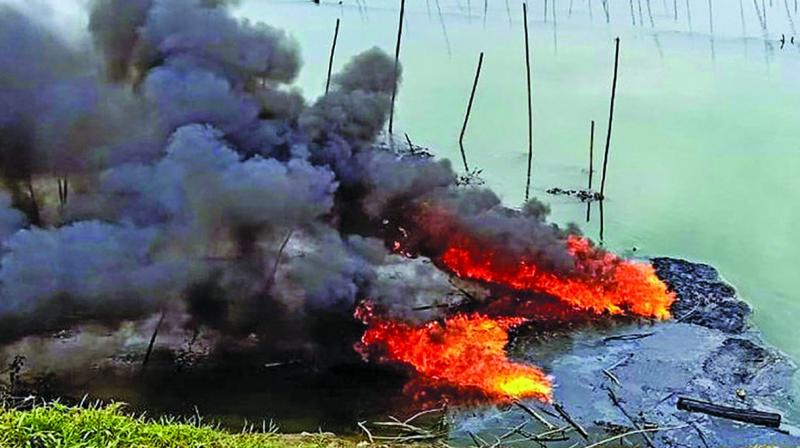 Plumes of smoke rise over a small stream of the Burhi Dihing river on Monday. (Photo: PTI)

Guwahati: In what has created panic among the residents of the area, a massive fire broke out on Assam’s Burhi Dihing river in Upper Assam’s Dibrugarh after spillage of oil following a crude oil pipeline blast.

Oil India authorities said that the leakage took place because of a “rare instrumentation error” in the central tank pump where the crude oil from all Oil India fields in Upper Assam region is collected. Though oil India claimed that the fire is under control and a team of experts are at the location to douse the fire, the area has been surrounded by a hellish red hue and huge plumes of smoke.

Locals suspect that some miscreants set fire after the crude oil came into the river. According to the reports, villagers had noticed the fire on the river three days ago and had informed the local administration. However, the authorities have not done anything to douse the flames and control the situation.

Officials of the Oil India Limited, headquartered at Duliajan in the district, however, said that the crude oil that trickled into the  river on Satur-day night could have been recovered had the stretch not been set on fire. “Our team had done their job that very night when one of our central tank pumps had an instrument failure,” sources in the Oil India headquarters, Duliajan, said.