The name is derived from India’s Brahmaputra and Russia’s Moskva rivers. 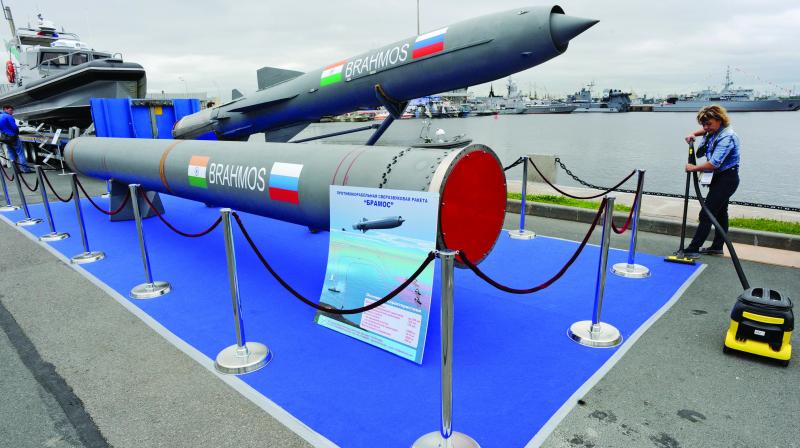 In 1998, India signed an agreement with Russia to design, develop, manufacture and market BrahMos, a supersonic cruise missile system jointly developed by India’s Defence Research and Development Organisation (DRDO) and Russia’s NPOM, launchable from land, aircraft, ships and submarines. BrahMos is a modification of Soviet-era anti-ship missiles (Oniks, Yakont) developed by the Reutov Design Bureau in the late 1980s. The name is derived from India’s Brahmaputra and Russia’s Moskva rivers. The first test launch was conducted on June 12, 2001, at the Chandipur range in Odisha, India, and subsequently, the production of missiles began at enterprises in both countries.

Development of these cruise missiles is a natural progression for India, in seeking to develop various platforms for its military arsenal, either on its own or with a partner — but nevertheless, in India, and thus it became the first Make in India venture. BrahMos is technically a ramjet-powered supersonic cruise missile with a solid propellant booster that can be launched from land-based canisters, submarines, ships and now aircraft. Travelling at speeds of Mach 2.8 to 3.0, it is the world’s fastest cruise missile, about three-and-a-half times faster than the American subsonic Harpoon cruise missile. Since its maiden successful test firing conducted on June 12, 2001, BrahMos has undergone a record number of over 70 flight tests to date from land, sea, sub-sea and air platforms, thereby validating its multifarious capability to completely annihilate high-value ground and sea-based targets with ultimate speed, pin-point accuracy and devastating firepower in all weather conditions by day and night. One of its s
pecial features is its ability to fly extremely close to the ground to avoid missile defence systems. In fact, during the terminal phase, the missile can fly as low as 10 m to the ground. In the final phase, the missile relies on an active radar seeker or inertial guidance.

While the Indian Army deployed the land-attack BrahMos (LACM) variant since 2007, the Indian Navy inducted the versatile weapon in both surface to air and anti-ship configurations onboard its frontline surface warfare platforms since 2005. The Indian Air Force (IAF) has also raised a land-attack BrahMos squadron and successfully test-fired the advanced air-launched version of the weapon (ALCM) for the very first time from its frontline Sukhoi-30MKI strike fighter against a sea-surface target on November 22, 2017, thereby creating history and making India the first and only country in the world to complete the “supersonic cruise missile triad”. In this test, the IAF successfully fired the BrahMos-A in an anti-shipping configuration off the eastern coast in the Bay of Bengal. The launch was smooth; it fell for about 100 to 150 m, ignited and followed the desired trajectory, before directly hitting the target ship. This only succeeded with dedicated support from the Indian Navy, by way of ensuring availability of the targets and a large number of monitoring ships to ensure data collection and range safety clearance.

BrahMos Aerospace became the first defence entity in the world to integrate and flight test the heaviest air-borne weapon onto a super-manoeuvrable fighter platform. In 2019, the missile underwent a number of successful test firings from land, sea and air platforms. The IAF conducted a second successful test firing of the advanced BrahMos air-launched cruise missile (ALCM) on May 22, 2019 against a land target in the Andaman & Nicobar Island region.

In July 2019, CEO, BrahMos Aerospace, Sudhir Kumar Mishra, announced, “India has successfully test-fired a vertical deep dive version of BrahMos, the world’s fastest supersonic cruise missile, that can now change the dynamics of conventional warfare... The upgraded version of the missile with enhanced range of up to 500 km is also ready… We can take on any ship at sea up to 300 to 400 km (far) and after some time, may be longer; we can take on land targets up to hundreds of kilometers and with the test that we have conducted some time back (from Sukhoi 30), ranges up to thousands of kilometers. He also informed that (a) it is possible to increase the range of this missile because India is a part of the elite Missile Technology Control Regime (MTCR), (b) for the Army, Navy and Air Force, it has become a weapon of choice and (c) the steep 90-degree version has become an ultimate aircraft carrier killer.

The BrahMos anti-ship version was launched successfully in November 2019 from an Indian Navy platform. On December 17, 2019, BrahMos-A was tested yet again from the Su-30 fighter in “user configuration” against a ship target and successfully met all mission objectives. In December 2019, two successful major tests of the missile — one from a Sukhoi Su-30MKI fighter aircraft against a sea target, and another fired from a land-based mobile launcher against an unidentified target. On January 20, 2020, the IAF commissioned the “Tigersharks” squadron of Su-30MKI fighters armed with the deadly BrahMos air-launched missile at the Thanjavur air base in Tamil Nadu. This will be a vital asset to keep a “strategic eye” over the Indian Ocean region and enhance India’s protection and deterrent capability.

Sharing an important design/production aspect with this author, BrahMos Aerospace general manager and marketing director Praveen Pathak said, “The air-launched variant had to be made 500 kg lighter than the land/naval variants. One of the major challenges DRDO scientists had to overcome was the optimisation of transfer-alignment inertial sensors. Thankfully, the experience of the IAF flight test crew and the dedicated and synergetic efforts of the IAF, DRDO and HAL (Hindustan Aeronautics Limited) ensured that the integration was smooth. Altogether, it has proven India’s ability to undertake such complex integrations on its own.”

Reportedly, three BrahMos missile regiments raised so far have been deployed in the western sector to counter threats from Pakistan and in the second phase of military expansion along the China front, the government reportedly gave the go-ahead for deployment of BrahMos cruise missiles in Arunachal Pradesh. The fourth regiment of cruise missiles, with a 290-km range, will improve India’s military reach into the Tibet Autonomous Region and counter China’s elaborate missile deployment along the Sino-Indian Line of Actual Control.

Emerging as a top product in the international cruise missile market, the demand for this powerful weapon is growing with several countries across continents expressing strong interest in acquiring the missile for their militaries. Speaking at the IMDEX Asia 2019 exhibition held on May 2019, Commodore S.K. Iyer, chief general manager for HR at BrahMos Aerospace, said the first missile export contract awaited a government-to-government approval. “A number of Southeast Asian countries are ready to buy our missiles... It will be our first export and we have received increasing interests in the missiles form Gulf countries,” he said. BrahMos Aerospace is eyeing more successes for the joint venture in 2020, especially in getting a go-ahead from the government for exporting the missile to friendly, responsible nations. The Indian defence sector sees good opportunities for exports to the Southeast Asian and the Gulf countries where slower economic growth rates have put budgetary pressure on acquiring viable, cost-ef
fective and reliable solutions.

There is a plan for the not too distant future to develop a hypersonic variant of the BrahMos missile which will travel at speeds faster than Mach 5.0.