India   All India  04 Feb 2020  No Nipah-like panic in Kerala over coronavirus cases
India, All India

No Nipah-like panic in Kerala over coronavirus cases

However, ‘yet’ is a good word to use in cases like these 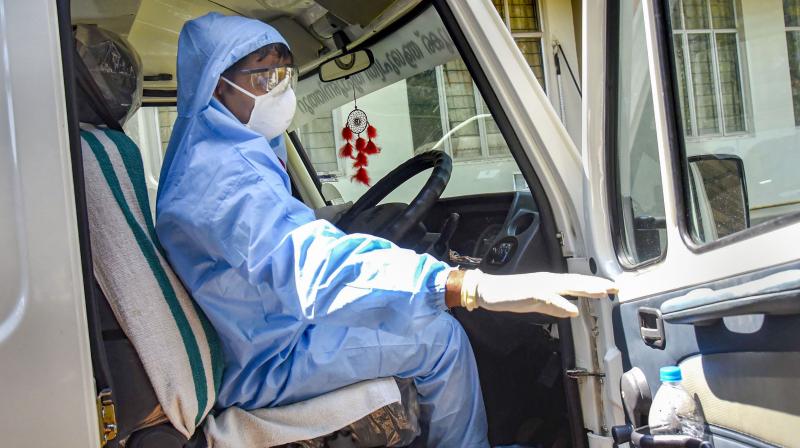 An ambulance driver wearing a protective suit prepares to exit the special isolation ward where coronavirus-suspected patients are being quarantined at the Kochi Medical college in Kerala, Tuesday, Feb. 4, 2020. (PTI Photo)

KOCHI: Three people have been found coronavirus positive, all from Kerala, and the state government has declared it a state calamity. But while anxieties are growing, they have not boiled over into panic.

Out in the streets of Kochi, surgical masks are not yet ubiquitous, except around the Government Medical College where a suspected case, the CEO of a Kochi-based startup who travelled to China to visit his TCS-employed wife, was quarantined for nearly a fortnight before he tested negative and was sent home.

There have not been any reports of returnees from China being sequestered from community, as we have heard from Chinese provinces far from the epicenter, Wuhan. The first coronavirus suspect has gone home with nary a notice.

This coronavirus thing in Kerala has so far been nothing like the Nipah virus scare seen in this tourist-friendly state in 2018. That outbreak, from fruit-eating bats, took 17 lives in Kerala and triggered familiar panic syndromes, such as people refraining buy all fruits lest they be infected from bats.

The major reason being cited for Kerala keeping its nerve now is the fact there have been no deaths. Even the three positive cases are reportedly in a stable condition in quarantine. And then, the positives have all been directly associated with Wuhan, the eye of the storm, being medical students there.

“In the case of Nipah, the outbreak was from within the state and the epicentre was Perambra in Kozhikdoe district. But in the case of the coronavirus, only those who have had a recent overseas travel history are vulnerable,” said a source in the health department.

For its part, the authorties have kept ahead of the panic curve by quickly invoking the WHO’s privacy protocols of not disclosing the identities of the suspects or the positives. Also, the police also quickly rounded up six people who spread unwanted knowledge sourced from WhatsApp University.

There’s also another good enough reason why this hasn’t been a Nipax redux. The mortality rate of coronavirus is only 2-7 per cent, much less than the the Nipah virus which had a high mortality rate of 60-70 per cent.

Since the first circle of suspects -- those exposed to China travel or Wuhan residency -- is well known, unlike the Nipah episode, the authorities have acted with clear knowledge of where to draw the first line of defence. All persons in the contact list of the infected Wuhan University students are being traced and isolated.

However, health minister K.K. Shylaja, speaking in the Legislative Assembly Monday, did not rule out the possibility of more positive cases coming up. All districts of the state have returnees from Wuhan.

“There is no room for panic but maximum efforts have to be made to prevent the spread of the virus. While the coronavirus is not known to cause immediate death, it can trigger complications in people with other health issues and in pregnant women. So considering the possibility of more positive cases, the government has stepped up health vigil,” she said.

Extensive training is being given to medics and parameds virus preventive measures. The government is focused on preventing the hospital staff from getting infected themselves.

A total of 2239 persons are under observation among whom 84 are admitted in isolation wards at various hospitals.

Meanwhile, the three coronavirus patients in Thrissur, Alappuzha and Kasargod districts are recuperating. Their condition is stable and they will be shifted from the isolation wards after the symptoms fully ease.