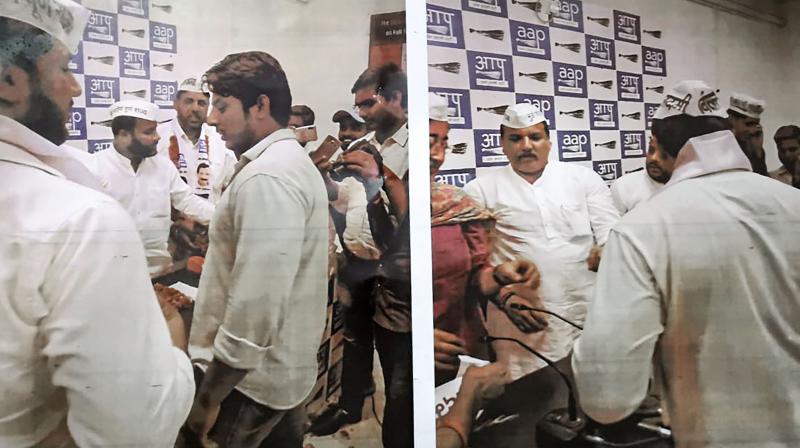 NEW DELHI: Hours after stating to court that Kapil Baisala, the man who opened fire at the Shaheen Bagh protest last week, had deleted his WhatsApp account, the Delhi Police came up with the revelation that the shooter was a member of the Aam Aadmi Party (AAP).

Deputy commissioner of police (Crime Branch) Rajesh Deo claimed to have come to this discovery when photos were retrieved from Kapil Baisala’s WhatsApp account. These photos, he claimed, showed the shooter and his father joining the AAP on his mobile phone in early 2019.

These photos were quickly released to the public.

The shooting at the Shaheen Bagh protest against the Citizenship Amendment Act (CAA) last week triggered speculation that the shooter was a right-wing sympathizer.

The AAP has been overt in expressing its sympathies for the protesters.

BJP leaders quickly launched into ‘ha, ha’ press conferences to put the squeeze on the AAP. The party’s new president J P Nada let loose a series of tweets in which he said the Delhi Police ‘revelation’ exposed the “dirty face” of the AAP and its boss Arvind Kejriwal.

"For political longing, Kejriwal and his people have sold the security of the country. Earlier, Kejriwal used to insult the Army and advocate terrorists, but today, relations with those who carry out terrorist activities has come to light," Nadda said.

Nadda went on to wax, “This nation will not forgive those who play with its security. Kejriwal and his entire team have been exposed. The people of Delhi will give a befitting reply."

Delhi votes for its Assembly on February 8.

Kapil Baisala was presented in court earlier in the day for a hearing of a police plea seeking four days of custody. The court gave them two.

During the hearing, the Delhi Police, which reports to the central government, told the court there was a “possibility” that the Shaheen Bagh shooting was part of a larger conspiracy.

He further said investigation had revealed that Baisala’s WhatsApp account had been purposely deleted.

"The account has been retrieved and most of the data has been recovered. Due to shortage of time it could not be analysed. The data is bulky in nature and he needs to be confronted with it," the police said.

It added that Baisala also needs to be confronted with a friend who accompanied him to the Shaheen Bagh protest site where the shooting took place.

"His friend is being interrogated at length in order to ascertain his involvement. Data in his friend's phone is also being scrutinised. The investigation is at an initial stage. The case is very serious and sensitive in nature which requires in-depth interrogation of the accused,” the police told the court.

Baisala’s advocate M S Sisodia and Akhil Rexwal opposed the remand plea, saying the probe agency has seized his mobile and all other relevant materials required for the investigation.

"The offences are bailable in nature. What will they do with my WhatsApp chats? What links do they want to establish? Where else do they need to take me," Sisodia asked.

On February 1, Baisala had fired two rounds in the air at Shaheen Bagh, where anti-CAA protests are being held for over a month now.

After being overpowered by police personnel, he had chanted "Jai Shri Ram" and said, "hamare desh me aur kisi ki nahi chalegi, sirf Hinduon ki chalegi (only Hindus shall have a say in our country, no one else)," as he was taken into custody by the Delhi Police.

This was the second such incident reported at Shaheen Bagh in a span of three days. Earlier on Thursday a man fired from a pistol at a group of anti-CAA protesters, injuring a student of the Jamia Millia Islamia University.