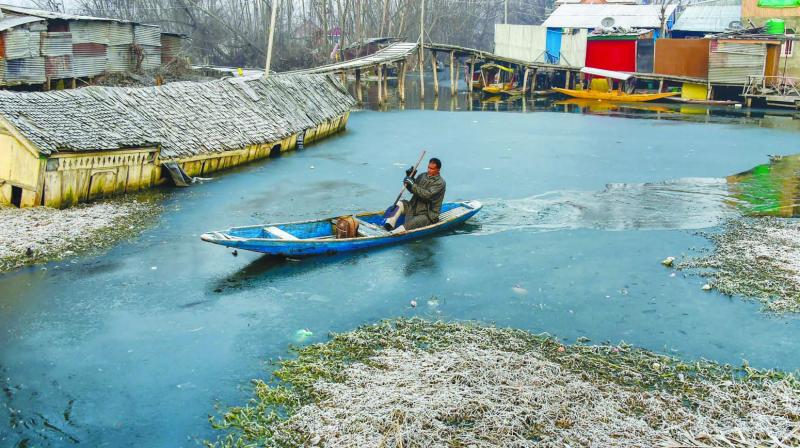 A Srinagar resident rows his boat in a frozen Dal lake in Kashmir.

Srinagar: After India announced a partial air shutdown across nine airports and the airspace north of New Delhi (the order was reversed a few hours later) amid heightening tensions along the borders with Pakistan on Wednesday, Kashmiri hoteliers were quick to offer free stay and food to the tourists stranded in the Valley.

The gesture apart from being the display of excellent Kashmiri hospitality was an attempt to reinforce confidence among the domestic (Indian) and foreign tourists holidaying in the Valley and encourage a good footfall for future too. In reality the Kashmir tourist traders and other stakeholders are, in the backdrop of the February 14 terror attack in southern district of Pulwama in which 49 personnel of the Central Reserve Police Force (CRPF) were killed and several others wounded, keeping their fingers crossed about the tourist arrivals in coming months.

The attack came at a time when Gulmarg and other resorts in the Valley were buzzing with hundreds of domestic and foreign tourists, enjoying snow and snow-related activities. Heavy snowfall in December-January and even during the first two weeks of February was boosting tourism in the Valley.

But the terror attack and the resultant tensions between India and Pakistan are playing the spoilsport. At a time when the government and other tourism stakeholders were planning to launch an intense promotional campaign to attract more tourists and also to make fresh efforts at persuading various countries to withdraw the “negative” travel advisories issued by them during the heyday of insurgency in the State, the United Kingdom’s foreign and commonwealth office (FCO) updated its foreign travel advise on India.

“These advisories can leave a negative impact on the tourist footfall. We’re hoping against the hope. The bickering between India and Pakistan and some recent incidents in the Valley are putting a damper on our plans,” said Rauf Tramboo, a well-know tour operator. He, however, hoped that March may be lean period the tourist inflow it will start picking up again from April.

Former director general of tourism Muhammad Ashraf is optimistic about it being a momentary impediment. In the backdrop of airstrikes across the Line of Control (LoC), he said that the tourist flow to the Valley is unlikely to be affected hugely. “At the moment the bulk of traffic is special interest tourism like the winter sports enthusiasts going to Gulmarg. The resort is full of skiers and there has been no panic”, he said. He added, “For past some time the number of adventure tourists participating in mountaineering, trekking, rafting and skiing has increased. It is expected to remain at good level as most of these activities take place away from populated areas where there is trouble sometimes”.

However, what has been also worrisome for the Valley’s tourism traders and other stakeholders are calls for ‘boycott Kashmir and Kashmiri’ issued by various people and organizations of the country following the Pulwama attack. Shiv Sena was among the first to call for boycotting Kashmir tourism for two years. Its MLC and spokesperson Manisha Kayande on February 16, two days the deadly terror attack, appealed to all the Indians and tour companies to boycott Kashmir tourism for two years to hurt Valley’s economy.

Even Meghalaya governor Tathagata Roy issued a similar call. Quoting an appeal from a retired Army Colonel, Mr Roy tweeted: “Don’t visit Kashmir, don’t go to Amarnath for the next 2 years. Don’t buy articles from Kashmir emporia or Kashmiri tradesman who come every winter. Boycott everything Kashmiri. I am inclined to agree.” The call evoked strong resentment by political parties and various sections of people in Jammu and Kashmir and beyond.

However, amid attacks on and harassment of Kashmiri traders, students and labourers in various parts of the country, Prime Minister Narendra Modi warned against the targeting of Kashmiris in the wake of the Pulwama terror attack and said, “Our fight is for Kashmir, not      against Kashmiris... Kashmiris have suffered the most due to terrorism, and the rest of the country must stand in their support.” The Supreme Court also came to the rescue of the Kashmiri and directed eleven states to take immediate actions to prevent threats and attacks on them.