Cong loses its way in fight to wrest Odisha citadel

The OPCC president Niranjan Patnaik, according to political analysts, has been found wanting to match the sweat of the opponents. 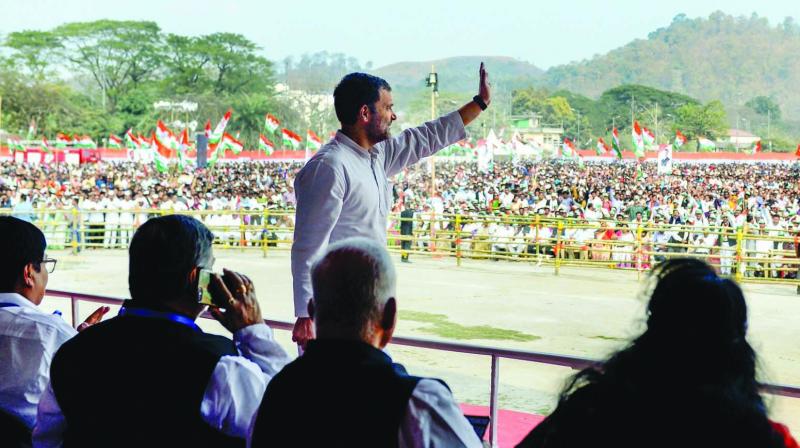 A file photo of Congress president Rahul Gandhi at a public rally.

Bhubaneswar: The Congress has to wait more, or so it seems, to end its dry spell in Odisha. The grand old party eyeing power in the state is utterly failing in its poll preparation vis a vis the BJD and the BJP, and desperately looking for a miracle to realise its dream.

All India Congress Committee (AICC) leader Jitendra Singh, the in-charge of Odisha, gave the initial leg-up to the electoral preparation. However, things have gone awry after he found himself engaged in Alwar, his Lok Sabha constituency in Rajasthan, leaving the Odisha Pradesh Congress Committee (OPCC) leaders to fend for themselves.

As a stopgap arrangement to meet the impact of Mr Singh's absence, the AICC has appointed Chhattisgarh health minister and senior Congress leader T.S. Singh Deo as temporary in-charge of Odisha.

A statement issued by AICC general secretary K.C. Venugopal said, “Party president Rahul Gandhi has appointed Mr Singh Deo as temporary in-charge of Odisha while the current in-charge of the party's affairs in the state, Jitendra Singh, will continue in his post as usual.”

The AICC hopes that Mr Singh Deo, with his years of experience in election management and because of his close ties with Odisha, will be able to galvanise the party's Odisha unit.

During a recent visit to Odisha, the senior Congress leader had toured several parts of Jagatsinghpur district with a team of Odisha Congress' manifesto committee to seek public opinion.

After spending nearly two decades in a limbo, the Congress had almost regained its pace in Odisha, especially after the party president Rahul Gandhi addressed two meetings on January 25 and February 6. However, the party has not been able to maintain the momentum since then while the BJD and the BJP have almost completed their first phase of campaigning in most of the 147 Assembly seats and 21 Lok Sabha constituencies.

While Odisha chief minister Naveen Patnaik himself is spearheading the BJD campaign, Union minister Dharmendra Pradhan is carrying the responsibility of BJP's campaign on his shoulders.

The OPCC president Niranjan Patnaik, according to political analysts, has been found wanting to match the sweat of the opponents. Though the Congress is busy in screening the prospective candidates for the twin Lok Sabha and Assembly elections, its organisational activities at the grassroots appear to have slowed down as a majority of the ticket aspirants camp in state capital Bhubaneswar in order to impress the party bosses.

Grapevine has it that a few more Congress MLAs are in touch with the BJD hoping that the ruling party is far more secure for them than the present party which has witnessed constant fall in its vote share since 2000.

In 2000, when the Congress lost power in the state to the BJD, the Congress had polled 33.78 per cent votes. In 2004 and 2009, it got 34.82 per cent and 29.1 per cent, respectively. Its fortune further nosedived in 2014 and the party had to be content with 25.7 per cent votes and its strength in the Assembly dropped 38 seats in 2004 to 16 seats, much because of the mess in candidate selection, alleged sale of party tickets and lack of coordination among the office-bearers.

Despite these odds, OPCC president Niranjan Patnaik put up a brave front and said desertions have in fact strengthened the party.

“Some people who are more like businessmen are migrating to the BJD to secure their commercial interests. They were never true servants of the people. Their departure has united the party and brought organisational discipline, key requirements for electoral success,” said the OPCC chief.