Tewari said that the Congress would like to ask Prime Minister Narendra Modi and Ms Swaraj whether this was “the diplomatic achievement”. 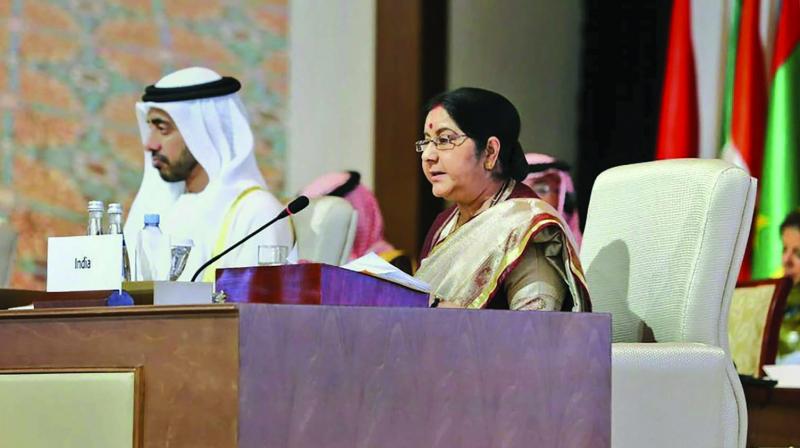 New Delhi: The Congress party on Sunday took on the Modi government over the 57-nation grouping of Organisation of Islamic Cooperation (OIC) countries adopting a resolution that “supported” Pakistan on Kashmir issue, saying that with this the NDA dispensation’s claim that the OIC inviting India to attend its plenary was a diplomatic success had fallen flat.

“External affairs minister Sushma Swaraj attended the OIC meeting in Abu Dhabi. The NDA-BJP government touted it as a huge diplomatic success for India that it has been invited to attend the plenary...But what happened in Abu Dhabi is extremely disturbing for India,” Congress spokes-person Manish Tewari told the media here.

Mr Tewari said that the Congress would like to ask Prime Minister  Narendra Modi and Ms Swaraj whether this was “the diplomatic achievement”. The Pakistan Foreign Office had on Saturday said the conference concluded in Abu Dhabi with a resolution that “supported” Pakistan on the Kashmir issue. “In a resolution, the OIC member states reiterated that Jammu and Kashmir remains the core dispute between Pakistan and India and its resolution is indispensable for the dream for peace in South Asia,” it claimed. New Delhi had reacted to the resolution by ass-erting that Jammu and Kashmir is an integral part of India and the issue is strictly internal to the country.

Ms Swaraj had become the first Indian minister to address the OIC meeting when she attended the inaugural plenary of the 46th session of  the Cou-ncil of Foreign Ministers (CFM) of OIC on Friday.

The Congress party had on Saturday also hit out at Mr Modi alleging that the country witnessed his “monologue, fake bravado and narcissistic lies”, as Congress president Rahul Gandhi accused him of being “solely responsible” for the delay in arrival of Rafale jets.

“Dear PM, Have you no shame at all? YOU stole 30,000 Crore and gave it to your friend Anil. YOU are solely responsible for the delay in the arrival of the RAFALE jets,” he tweeted

“YOU are WHY brave IAF pilots like Wing Cdr. Abhinandan, are risking their lives flying outdated jets,” Mr Gandhi said on Twitter.

The response came after Modi said the country was feeling the absence of Rafale and results would have been different if India had the fighter jets as he attacked the Congress for its tirade against his government over the aircraft deal.