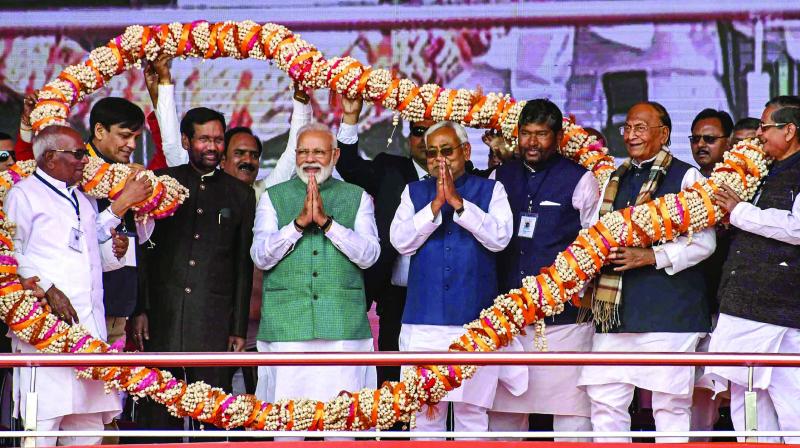 Patna: Launching the NDA’s Lok Sabha campaign in Bihar, Prime Minister Narendra Modi on Sunday unleashed a blistering attack on the Congress-led Opposition accusing it of focusing solely on trying to “finish” him off while he is working to quell terrorism, ensure national security, eradicate poverty and corruption, and generate employment.

Sharing the dais with JD(U) chief and Bihar chief minister Nitish Kumar for the first time in nine years, Mr Modi came down heavily on Opposition parties for their skepticism over the surgical strikes by the Army after the Uri terror attack, and the air strikes in Pakistan’s Balakot after the Pulwama suicide bombing.

“First they asked for evidence of the surgical strikes (in Uri). Now they are demanding evidence of the air strikes by the Air Force. Why are the Congress and other parties working towards destroying the morale of the armed forces?” he asked.

The Prime Minister said that at a time when the country needs to show that it is standing together against terrorism, the Opposition has joined hands to condemn the Centre’s actions.

“Is it appropriate for these parties to speak in a language that suits Pakistan? Leaders of the neighbouring country are using it as a shield to protect themselves against the charge of promoting terrorism. They are clapping gleefully,” he said, slamming the 21 Opposition parties’ decision to pass as censure motion against the NDA government after the air strikes.

Without naming Congress chief Rahul Gandhi, who has coined the slogan “Chowkidar chor hai” (the watchman is the thief), Mr Modi said, “Those who run their political shops in the name of the poor and care for nothing except for their dynasties, are having problems with the chowkidar. But the chowkidar is alert and on the job.”

Mr Modi also took a veiled dig at jailed RJD supremo Lalu Prasad, saying, “The people of Bihar have seen a lot in the name of purchase of fodder. Our government has worked for doing away with middlemen who siphon off public money.”

The NDA rally was organised exactly a month after the Congress held an impressive Jan Sankalp rally at the same venue. This was Mr Modi’s second visit to Bihar in less than a fortnight. He had earlier visited Begusarai in Bihar on February 17 and launched several projects.

While showcasing the achievements of NDA government the Prime Minister said that for the first time in 50 years India was invited to the OIC meeting which is an influential grouping of 57 Islamic countries.

He also said that the Saudi Crown Prince after meeting him last week increased the Haj quota to two lakhs and ordered for the release of 850 Indian prisoners in his country.

“The achievements which I have been speaking about became possible because you chose the NDA in 2014. Our government had the courage to take decisions and this will continue if we return in 2019,” Mr Modi said.