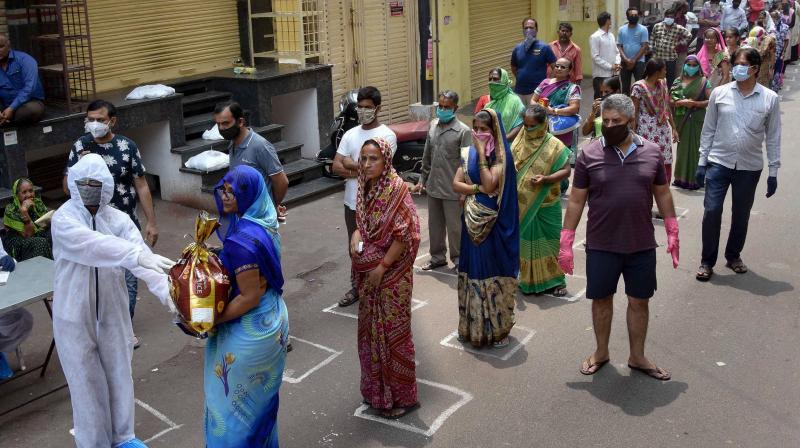 Women queue up maintaining a safe distance to collect their ration. (PTI photo)

Bhopal: The almost three-week-long political instability witnessed in Madhya Pradesh during March 2-20, following sudden ‘disappearance’ of a number of Congress MLAs had literally rendered the administration here ineffective leading to the current crisis facing the state in the wake of coronavirus outbreak.

The preparedness by the state health department to deal with the situation has seriously been affected owing to absence of health minister in the then Kamal Nath ministry for nearly two weeks since the then incumbent health minister was among 22 Congress MLAs who had raised a banner of revolt against then former CM Mr Nath and subsequently resigned from the assembly.

“There was hardly any meeting of health department to review the preparedness to deal with coronavirus outbreak in the state when MP was passing through political turmoil.

Former state finance minister Tarun Bhanot held a less than ‘half-an-hour’ meeting to take stock of the situation in the dying hours of the Kamal Nath government. The meeting was more symbolical than a meaningful one”, a senior officer in the state health department here told this newspaper on Friday unwilling to be quoted.

“The Centre was frequently nudging the then Kamal Nath government to gear up to face the situation. But, the former chief minister Mr Nath had appeared more preoccupied with saving his government than acting on advisories by the Centre then”, the officer said.

As a result of it, no mechanism to combat the virus menace could be put in place by the state government then, sources revealed.

“There was no plan to establish labs for testing samples and create isolation wards in hospitals for suspected coronavirus people.  The entire administration was literally groping in dark about its future course of action to deal with the situation at the time”, sources said.

“The disease is spreading its tentacles to new areas in the state. The state was yet to enhance the capacity to meet the challenge”, a health worker revealed.

“MP has currently six testing facilities. The state has a population of 7.3 crore people and needs at least 25 testing labs to test coronavirus cases”, Jan Swasthya Abhiyan, an NGO extending its helping hand to deal with the situation, noted.

“Rate of testing is still low in MP in view of increasing cases. The state needs to increase its capacity at the level of sample collection as well as testing facilities. It is crucial to set up at least five testing facilities per region so that all the 52 districts in the state are covered”, S R Azad of the Abhiyan said.

As of April one, 2020, the state government health department has reported a total number of 16709 PPE kits, 74380 N95 masks, and a total of 2073 ICU beds and 836 ventilators across government hospitals, medical college hospitals and private hospitals in the state.