Maoists used rockets on securiy personnel in Chhattisgarh; Toll at 22

Around 2,000 jawans were mobilized from five camps of security forces in Sukma and Bijapur districts to launch counterinsurgency operations 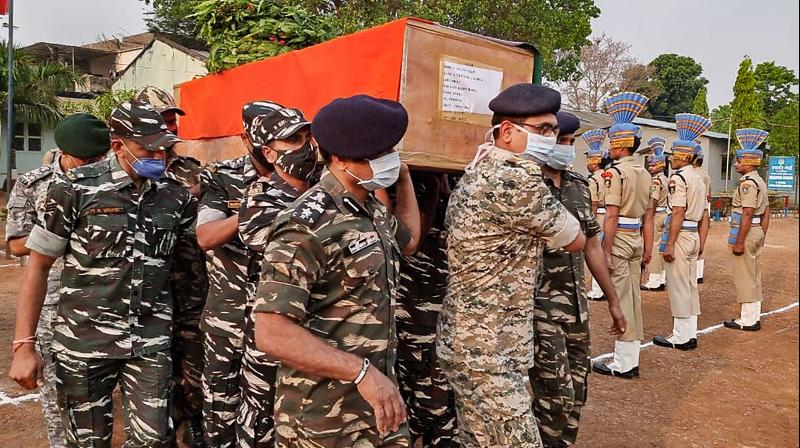 CRPF personnel carry the coffin of a paramilitary soldier who lost his life in an encounter with Maoists, in Bijapur district of Chhattisgarh, Sunday, April 04, 2021. (PTI)

Raipur: A day after Maoists ambushed a joint team of security forces in the Terram area along the Sukma-Bijapur border in Chhattisgarh’s south Bastar region, the bodies of 20 jawans slain in the encounter were recovered at the attack site on Sunday.

With this, the toll of security personnel attack has mounted to 22.

“Two bodies (of jawans) were recovered on Saturday and 20 on Sunday. One (jawan) was still missing,” Director General of Police of Chhattisgarh D.M. Awasthi told reporters.

A commando of the CoBRA unit, identified as Rakeswar Singh Mahhas, was still missing, he added. Thirty-one jawans were injured, seven of them seriously, in the incident.

“Reinforcements were rushed to the attack site on Sunday morning to recover the bodies of the jawans. A Mi-7 helicopter evacuated the bodies,” a senior police officer posted in Bastar told this newspaper.

According to him, the bodies lay at three different places within an area of 500 metres where the Maoists had laid the ambush.

Used syringes were seen in Tikalgudam village, one of the three encounter sites, indicating that jawans came under attack by the Maoists when they were administering first aid to their injured colleagues. Spent shells of rockets were also found in the village, which has now been completely deserted by the villagers.

Around 2,000 jawans were mobilized from five camps of security forces in Sukma and Bijapur districts to launch a counterinsurgency operations in Terram area on Saturday following specific intelligence inputs with regard to the presence of the PLGA (People’s Liberation Guerrilla Army) battalion number one commander Madvi Hidma along with his militiamen in the area.

One of the joint search parties mobilised from Bijapur walked into a two-km ambush laid by the Maoists near Jonguda hills when they were returning to their base camp after anti-Maoist operation, a senior police officer posted in Bastar said.

“Naxals used under-barrel grenade launcher and light machine gun (LMG) during the ambush. They fired mortars and bullets initially. Several security personnel were injured. The rest of the search party formed a box formation and took the injured to safety,“ he said.

The Maoists opened fire on them from LMG from the side of a village, leading to heavy casualties, CRPF Director-General Kuldeep Singh, who visited Chhattisgarh on Sunday to take stock of the situation, told mediapersons in Raipur.

Question are being asked whether the inputs regarding the presence of Hidma in the Terram area, based on which the counterinsurgency was launched by security forces, had been planted by Maoists.

“I cannot comment on it. The security forces tried to make inroads into the core area of Maoists and held fort for four hours. That is a big achievement”, a senior CRPF officer here told this newspaper.

Chhattisgarh Chief Minister Bhupesh Baghel who flew to Raipur in the evening after winding up his election campaign for the Congress in Assam, said Maoists had also suffered huge casualties in the encounter. “We received reports that Maoists took away bodies of their colleagues in four tractors from the encounter site,” he said.

Baghel indicated that his government would toughen its stand towards Maoists after the incident. “Maoists are fighting their last battle of survival now”, he added.

Prime Minister Narendra Modi expressed his condolence to the bereaved families of the slain jawans. “My thoughts are with the families of those martyred while fighting Maoists in Chhattisgarh. The sacrifices of the brave martyrs will never be forgotten. May the injury recover at the earliest,” he posted on Twitter.

“I bow to sacrifices of our brave security personnel martyred while fighting Maoists in Chhattisgarh….. We will continue our fight against these enemies of peace and progress”, Union home minister Amit Shah tweeted.