In Bhubaneswar, the roof of a building at AIIMS was ripped off and its video clip was tweeted by the government’s media wing. 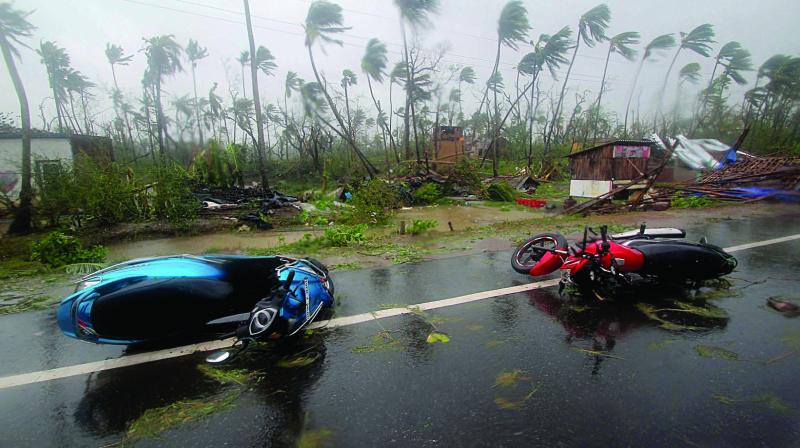 Motorcycles lie on a street in Puri after Cyclone Fani hit Odisha on Friday. (Photo: AP)

Puri: Eight people were killed as Cyclone Fani battered Odisha on Friday, packing in rain and windstorm that gusted up to 200 kmph, blowing away thatched houses, uprooting trees and electricity poles, cutting off power supply and swamping towns and villages.

The monster weather system, the biggest in years, made landfall at the holy city of Puri at around 8 am and continued to wreak havoc for four hours.

Special relief commissioner B.P. Sethi said three people had died in different incidents in Puri, Nayagarh and Kendrapara districts. While a teenage boy was killed when a tree collapsed on him in Puri, flying debris from a concrete structure left a woman dead in Nayagarh. An elderly woman died of heart attack at a relief shelter in Kendrapara district. By evening, the toll mounted to eight.

In Bhubaneswar, the roof of a building at AIIMS was ripped off and its video clip was tweeted by the government’s media wing.

“Extensive damage to the structure of AIIMS Bhubaneswar, all patients, staff and students safe,” Union health secretary Preeti Sudan was quoted as saying.

Fani, which is pronounced as “Foni” and means snake hood in Bengali, struck with the fury and venom of a poisonous snake, bringing destruction to districts like Puri, Bhubaneswar, Khurda, Cuttack, Jagatsinghpur, Kendrapara, Jajpur, Bhadrak and Balasore.

“The landfall of Fani happened at Puri at around 8 am. We have recorded wind speed of 142 km from hour gusting up to 175 km per hour,” said Dr Mrutyunjay Mohapatra, additional director general of India Meteorological Department, New Delhi.

Puri city, Bhubaneswar, Cuttack and many other parts of the state remained completely disconnected from the world with internet and telephone services hit, flight and train services remaining suspended.

After pounding Odisha and heading northeastwards, losing strength on the way, the extremely severe cyclone (ESC) moved towards West Bengal where it is likely to hit Kolkata early on Saturday with gale wind speed reaching 90 to 100 kmph.

“We are monitoring the situation 24x7 and doing all it takes... Be alert, take care and stay safe for the next two days,” West Bengal chief minister Mamata Banerjee tweeted.

The authorities in Odisha, where 10,000 people perished in a 1999 cyclone, had evacuated more than a million people two days ahead of the cylone from about 10,000 villages and 52 urban agglomerations in probably the largest evacuation exercise at the time of a natural calamity in the country.

The evacuees have been accommodated in over 4,000 shelters, including 880 specially designed cyclone centres.

A baby was born near Bhubaneswar just as the cyclone passed through. “We are calling her Lady Fani as she was born when the hospital was hit,” said a spokesperson for the hospital.

Fani is the strongest cyclonic storm since the Super Cyclone of 1999, which claimed close to 10,000 lives and battered the Odisha coast for 30 hours

Winds from to the weather system of the were felt as far away as Mount Everest, with tents blown away at Camp 2 at 6,400 metres (21,000 feet) and Nepali authorities cautioning helicopters against flying.

As Fani pummelled Odisha, neighbouring West Bengal braced itself for its fury.

The sky was overcast in Kolkata and several other places since Friday morning as rain came in spurts, inundating several parts of the state capital.

Traffic snarls were reported from different places in the city. The storm brought down the political temperature, with Chief Minister Mamata Banerjee cancelling all her election rallies that were planned over the next 48 hours and getting down to monitoring the situation.

“The eye of the storm is likely to be weakened when it enters West Bengal. The wind speed will be around 100 kmph to 110 kmph,” an official of the meteorological department said.

A red alert has been issued in coastal areas and fishermen have been asked not to venture into the sea.