Dharavi, the Covid-19 hotspot in the city also saw a whopping 94 new cases, the highest single-day toll so far 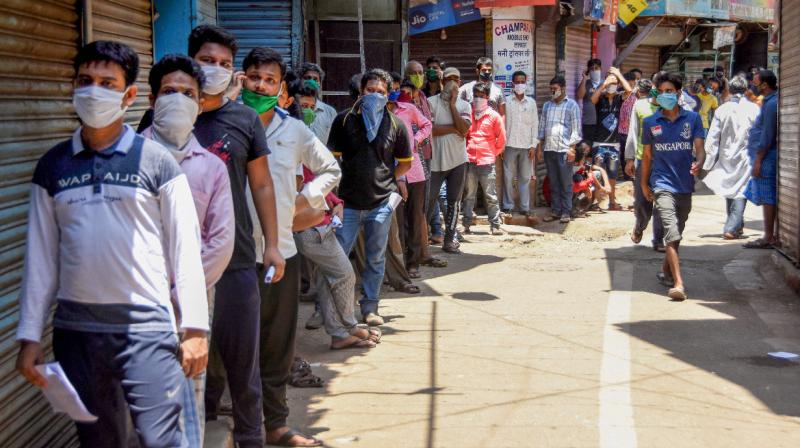 People queue up at a doctor's clinic to get a medical certificate in Dharavi, Mumbai. PTI photo

Mumbai: With 678 persons testing positive on Saturday, the number of coronavirus patients in Maharashtra reached 12,974, while the death toll due to the pandemic reached 548 with 27 new deaths. However, 115 patients recovered and were discharged from hospital during the day, taking the number of recovered patients to 2,115, a statement from the state health department said.

Out of the total deaths, 21 were recorded in Mumbai, four in Pune city and one each was recorded in Bhiwandi and Navi Mumbai. According to reports, 16 were men and 11 women. Thirteen out of 27 patients had high-risk comorbidities such as diabetes, hypertension, heart disease, etc.

Dharavi, the Covid-19 hotspot in the city also saw a whopping 94 new cases, the highest single-day toll so far; while two people lost their lives. In some relief, 100 more patients also recovered.

Meanwhile, senior Congress leader and Maharashtra energy minister Nitin Raut wrote a letter to Union home minister Amit Shah and railway minister Piyush Goyal demanding to stop collecting travel fare from the migrant labourers. Besides, Mr Raut has also asked Maharashtra chief minister Uddhav Thackeray to take responsibility for the travel expenses of migrant labourers. The migrants, stuck in Maharashtra, are being sent to their respective states through railways but have been charged for the railway tickets.

Maharashtra NCP general secretary Parasnath Tiwari too demanded ‘free of cost’ travel for migrant labourers. He wrote a letter to the railway minister and chief minister in this regard. Meanwhile, the railway officials said that they are charging the state government for the superfast trains as the trains are running at a speed of 100 km/hour with few halts.

Speaking with this paper, Mr Raut said, “The Central government should have burnt the expenditure of the migrant labourers’ tickets. The labourers are facing hardship since past 40 days owing to the lockdown. They don’t have enough money as they are daily wage workers. The government should have allowed them to travel for free. I have requested the Centre to make arrangements from the PM CARES fund.”

A senior railway official said that the service has been provided only on the state government’s request. They are selling tickets to the state as per the policy of the railway board. “We are giving the tickets in bulk to the respective district collector, who pays to the railway for the same. We are not charging them extra. However, we are providing food and water for free with the help of IRCTC to every migrant labourer,” the railway official said. The state of Jharkhand has been paying the fare of tickets for special trains.

A 23-year-old traveller Mithilesh Gaud (23) boarded a special train from Vasai to Gorakhpur on Saturday night. He said, “I met a representative of the state government in Buddha Bazaar in Vasai and paid `740 for the railway ticket. However, I was provided water, breakfast and a meal for free by the railways.”