India   All India  04 May 2020  Conservative estimate: Armed Forces Thank You show cost Rs 50 crore. Was it worth it?
India, All India

Conservative estimate: Armed Forces Thank You show cost Rs 50 crore. Was it worth it?

Sources: Just the Su-30 flypast over Marine Drive in Mumbai would have cost between Rs 45 lakh 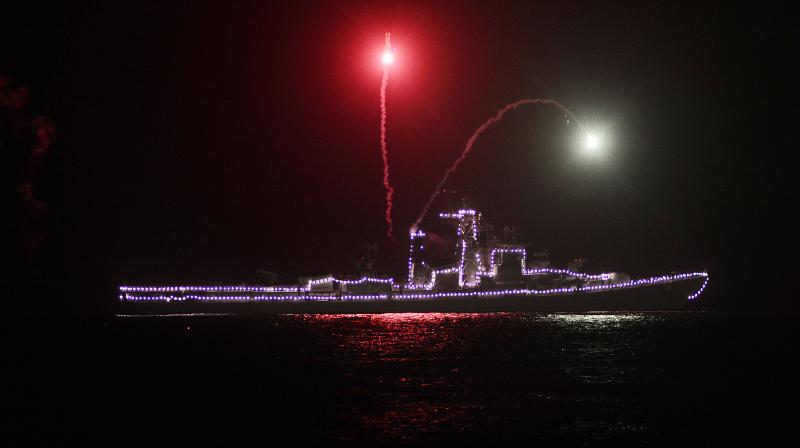 An illuminated Indian Navy warship release flares as a signal of gratitude to frontline medical staff fighting the COVID-19 pandemic off the Ramakrishna beach in Visakhapatnam on Sunday, May 3, 2020. (DC Photo: K Murali Krishna)

Hyderabad: The Indian armed forces's tribute to frontline workers battling the coronavirus outbreak was an expensive affair, considering that the poor state of the economy.

Going by conservative estimates, the drill by the Army, Navy and Air Force would have cost the Centre around Rs 50 crore, if not more. Criticism has come from various quarters over the need for this exercise in these difficult times when migrant workers are undergoing untold hardships, even death in some cases, and hospital staff not having personal protection equipment.

If hush-hush discussions within the rank and file of the armed forces are any indication, many of them too felt that the exercise was avoidable.

Sources in the defence establishment told Deccan Chronicle that the operating cost to fly the bigger fighter planes for an hour is between Rs 6.5 and Rs 7 crore. 'Operating costs’ means fuel, maintenance, man hours and all other expenditure, they said. The cost of flying smaller aircraft like trainers and helicopters is around Rs 2 lakh per hour per aircraft.

For operating a military transport aircraft such as the C-130J Super Hercules, the cost is three times that of a fighter plane. As part of Sunday’s exercise, two C-130J Super Hercules aircraft flew over Srinagar and Chandigarh. These aircraft were also part of the flypast over Rajpath in New Delhi.

Similarly, the IAF's Su-30 aircraft flew over Marine Drive in Mumbai. ''These three aircraft took off from Pune. This itself cost between Rs 45 and Rs 50 lakh,'' sources said.

Across the country, including Telangana state, IAF choppers showered petals on hospitals while in Kochi, surveillance aircraft conducted a fly-past. ''For the whole of yesterday, trial runs were conducted which involved a lot of flying across all states,'' sources said.

In many hospitals, including Gandhi Hospital in Hyderabad, the armed forces distributed soft drinks and snacks, which were ferried in several trucks.

While thanking the armed forces for the tribute, general secretary of the Resident Doctors’ Association, AIIMS, Delhi, Dr Srinivas Raj Kumar said that the government should also pay attention to shortcomings in preparedness which will decide the final outcome of the battle against Covid-19.

Here is a WhatsApp post that was in circulation among the armed forces for most part of Sunday following the killing of five security personnel, including a colonel and major, during an operation in Handwara, in Kashmir:

‘Home they brought her warrior dead
No helicopter petal shower,
No band to show military power
The flypast all over.
Navy lights the evening will shower
And while the nation goes to bed
Home will reach these warriors dead...’