The incident comes just a day after news footage of the body of a woman being wheeled in a garbage cart to the Sri Krishna hospital. 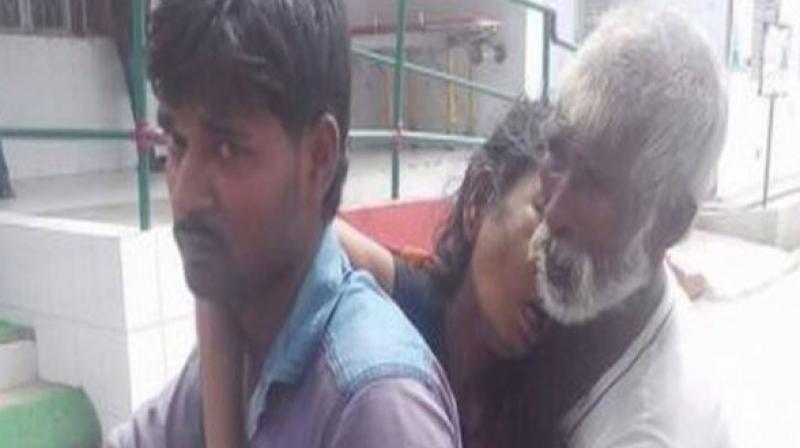 Sah's son, Pappu, placed Susheela's body on a motorcycle, with Sah himself holding it as pillion rider to transport it to their village home. (Photo: ANI | Twitter)

Purnia (Bihar): In a shocking incident, a man in Bihar's Purnia district carried his wife's dead body on a motorcycle to reach his home for her last rites as he was denied a mortuary van at a government hospital.

He was unable to afford a private ambulance.

60-year-old Shankar Sah is a resident of Ranibari village of Purnia district, whose wife-50-year-old Susheela Devi died of illness at the Purnia Sadar Hospital on Friday.

Despite all the efforts, Sah could not get any help from the hospital authorities and hence placed his wife's body on a motorcycle, with himself holding it as pillion rider to reach their village home.

Susheela was suffering from a heart disease as well as Tuberculosis.

"After the death of my wife I was told to take away the body and when I requested the medical staff on duty for a vehicle to carry it back to my village, they told me to arrange for it on my own," said Sah.

He added that due to financial issue he couldn't get any vehicle for transport.

"I approached the driver of an ambulance, who demanded Rs. 1,500 which I could not afford," Sah said.

Sah's son, 32-year-old Pappu, then placed Susheela's body on a motorcycle, with Sah himself holding it as pillion rider to transport it to their village home.

Both father and son are wage labourers and work in Punjab. They were informed that Susheela has fallen ill. They rushed back and got her admitted to the Purnia Sadar Hospital where she died.

"It is a very unfortunate incident but no mortuary van is available at the Sadar Hospital, at present, as the one it had is not functional. So, everyone has to arrange one on his own," said Purnia civil surgeon M. M. Wasim.

District Magistrate Pankaj Kumar Pal said he had already ordered a probe into the matter.

The Purnia incident happened just a day after news footage of the body of a destitute woman being wheeled in a garbage cart to the Sri Krishna Medical College Hospital in Muzaffarpur for post-mortem examination, caused an outrage and prompted the district authorities to initiate an inquiry.

Earlier, in March this year, relatives of another woman who died at the Muzaffarpur Sadar Hospital, were forced to carry her body on foot for about 500 meters before they could engage an auto-rickshaw to take it home.

This also happened after they were allegedly denied an ambulance at the hospital.