‘This is Lord Ram's birthplace. Foreign invaders broke it and we want it back. They will do it. Only Modi Ji will do it,’ Mahant Das said. 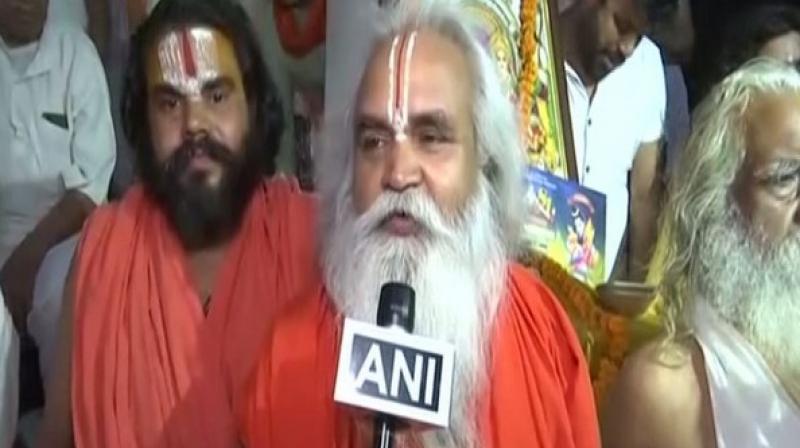 The Ram Janma Bhoomi Nyas asserted that solution of issue is 'already there' but talks are premature. (Photo: ANI)

Ayodhya: Following a meeting of Vishwa Hindu Parishad (VHP) leaders with saints over the Ram Temple issue, Ram Janma Bhoomi Nyas president Mahant Nritya Gopal Das on Monday said they will pressurise the government for the construction of a Ram temple in Ayodhya.

Speaking to reporters, Das said, "We will pressurise the government and encourage them for construction of the temple. Steps as necessary will be taken."

VHP international vice president Champat Rai also took part in the meeting and asserted that only BJP can get the temple built.

"This is Lord Ram's birthplace. Foreign invaders broke it and we want it back. They will do it. Only Modi Ji will do it," he said.

He also asserted that the solution of the issue is 'already there' but talks are premature.

Former MP and Ramjanambhoomi Nyas member Ram Vilas Vedanti also participated in deliberations and said, "Crores of people say Jai Shri Ram, hence it will win and those who betray Ram will lose."

In the middle of June, a large meeting of saints is planned to take place on the issue of Ram temple. There is also a VHP office-bearers meeting planned on the issue of temple construction during Haridwar Kumbh.