75,940 people living near the seashore and landslide prone areas were shifted to safer places 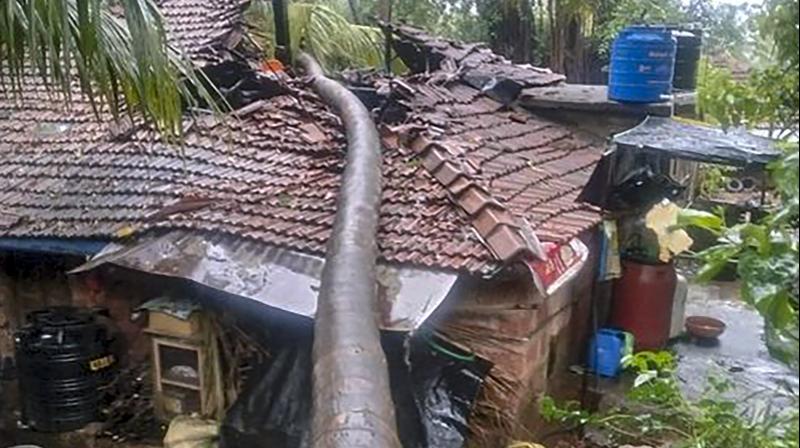 A tree fell on a house after rains and strong winds triggered by Cyclone Nisarga, in Sindhudurg district of Maharashtra. PTI photo

Mumbai and its surrounding areas heaved a huge sigh of relief as the cyclonic storm ‘Nisarga’ passed through without causing much damage on Wednesday.

Though coastal parts of the state were lashed by heavy rains and gusty winds, Maharashtra remained largely unscathed with no major untoward incident reported. However, over four people died in four cyclone-related incidents in Pune, Raigad and Palghar district. Two men died after an electric pole and a tree fell on them in Alibaug district while two others died in Pune after a wall of their house collapsed.

Cyclone Nisarga made landfall at the coastal town of Alibaug in Raigad district, about 100 kms from south of Mumbai, at around 1 pm with wind speeds of up to 120 kmph. It later moved up and hit the coastal districts of Mumbai, Thane, Raigad and Palghar with winds of up to 100 kmph to 110 kmph. Heavy rainfall was also reported in North Maharashtra and Pune.

As many as 75,940 people living near the seashore and landslide prone areas in Mumbai were shifted to safer places by the Brihanmumbai Municipal Corporation (BMC). Milind Borikar, the collector of Mumbai Suburban, said that with the help of the civic body, they have evacuated 12,000 people from coastline areas of Mumbai suburbs, land sliding areas and hilly areas to BMC schools. The civic body is also providing food and water to them.

The flight operations at Chhatrapati Shivaji Maharaj International Airport in Mumbai were kept shut till 7pm in view of the landfall of cyclone and they restarted at 6pm. The decision to temporarily shut the airport was taken after a FedEx flight from Bengaluru made a runway excursion while landing. “In consultation with AAI, considering the strong crosswinds, it has been decided that no arrivals and departures will take place between 14.30-19.00 hours,” an official statement from the Mumbai International Airport Ltd (MIAL) said.

Trees were uprooted across Mumbai with around 117 tree falling incidents reported due to heavy rains and gusty winds. Vehicular movement on the Bandra-Worli Sea Link was also suspended. As part of the safety measure, the wild animals at the Byculla zoo were shifted to holding areas.

Three members of a family were injured when cement blocks fell on their shanty from an under-construction building in Santacruz in Mumbai due to gusty winds. Three shanties were damaged in the incident that took place around 11.30 am in Dawari Nagar in Santacruz. The injured have been identified as Viraj Paste (15), Santosh Paste (43) and Sanjay Paste (45).

In Raigad too, many trees and electricity poles were uprooted. An official from Disaster Management Unit said that more than ten people were injured in Raigad district and near Ratnagiri and Raigad border area. District collector Nidhi Choudhary said, “Due to the impact of the gusting winds, many trees and electric poles fell down in Shrivardhan as well as in Alibaug. 13,541 people have been shifted to safer places.”

A senior officer of Mantralaya, who is closely monitoring the situation, told The Asian Age, “Roofs of PDS godown were blown in Raigad district. Supply of Electricity was disrupted owing to electricity supply wires getting snapped. As many as 7,003 fisherman boats were moved to a safe place. Sixteen NDRF teams and six SDRF teams are working round the clock in the state”.

Revenue Minister Balasaheb Thorat said that the cyclone is moving towards Karjat. The most affected areas are Murud and Shrivardhan in Raigad district. Panchnama is being conducted and the administration is working with its complete strength to restore normalcy.