Mumbai continued to receive rainfall on Thursday, a day after the cyclone made landfall near Alibaug in neighbouring Raigad district 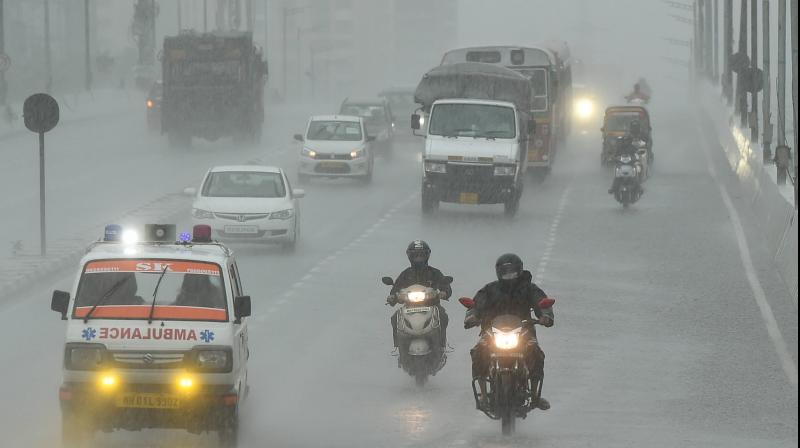 Vehicles ply on Eastern Express highway during rain in the aftermath of cyclone Nisarga, in Mumbai. PTI photo

Mumbai: Cyclone Nisarga and its accompanying rains seem to have had a positive impact on Mumbais overall air quality index, which improved to 17 on Thursday, the best reading for this year as of now, an official said.

Mumbai continued to receive rainfall on Thursday, a day after the cyclone made landfall near Alibaug in neighbouring Raigad district.

The current air quality of Mumbai recorded at noon falls in the good category, that poses little or no health risk, according to the official website of the System of Air Quality and Weather Forecasting and Research (SAFAR).

The concentration of PM 2.5, tiny particulate matter less than 2.5 microns in diameter which can enter deep into the lungs and even the bloodstream, was recorded at 15 (good).

"This is the best record of the year till now. It is due to the combination of high-speed winds and accompanying rains that the air quality index (AQI) has improved," SAFAR director Dr Gufran Beig said.

The overall air quality index (AQI) of the megapolis is likely to be 15 on Friday, SAFAR said.

Cyclone Nisarga, which spared Mumbai after it made landfall near adjoining Alibaug on Wednesday, is now a depression over west Vidarbha region in Maharashtra and will weaken further, the India Meteorological Department (IMD) said on Thursday.

The cyclone made landfall near Alibaug, about 110 km from here on Wednesday afternoon, sparing India's financial centre which is already reeling under the COVID-19 pandemic.