Mumbaikars heaved a sigh of relief as the cyclone's damage appeared limited. 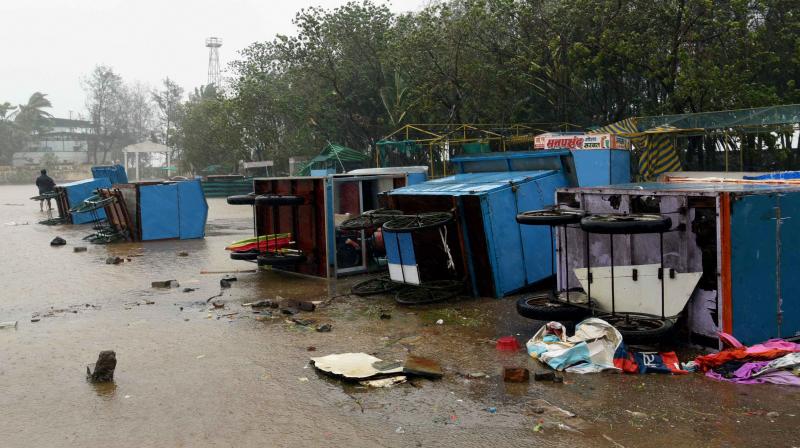 Alibaug faced the brunt of the cyclone. (PTI)

Mumbai:  Cyclone Nisarga which spared Mumbai after it made landfall near adjoining Alibaug is now a depression over west Vidarbha region in Maharashtra and will weaken further, the India Meteorological Department(IMD) said on Thursday.

Cyclone Nisarga made landfall near Alibaug, about 110 km from here on Wednesday, sparing India's financial centre which is already reeling under the COVID-19 pandemic.

"Deep Depression weakened into a Depression over west Vidarbha (Maharashtra) at 0530 IST of 4th June, to move east- northeastwards and weaken into a Well Marked Low Pressure Area (WML) by today evening," the department tweeted.

The cyclone had the coastal districts of Maharashtra from Arabian Sea with wind speeds of up to 120 kilometres per hour (kmph) on Wednesday afternoon. Mumbai was on edge as it braced for the cyclone after a gap of 72 years.

The neighbouring coastal districts of Raigad and Palghar bore the brunt of the storm experiencing strong winds, heavy rainfall and raging sea surge. Tidal waves measuring up to 6-8 feet lashed parts of the coastal areas.

Tin roofs erected on the terraces of residential apartments flew away in some places and several trees and electricity poles were also uprooted.

A 58-year-old man died after a power transformer fell on him while he was rushing home to escape the cyclone fury in Raigad district, while s 65-year-old woman and a 52-year-old man died in house collapse after the tin sheets on the roof were blown in separate incidents in Pune district, officials said.

Mumbaikars heaved a sigh of relief as the cyclone's damage appeared limited to uprooting of trees in some areas that led to vehicles being crushed.