An expert in fabricating IEDs, he was also involved in the terror attack at Lethpora, Pulwama which claimed over forty CRPF personnel 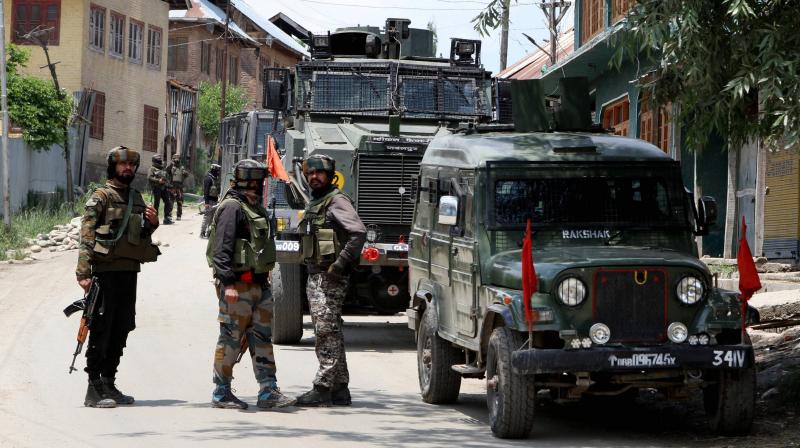 Security forces jawans stand guard during an encounter with the militants in the Kangan area of Pulwama district of south Kashmir. PTI photo

Srinagar: As security forces have pushed offensive actions more vigorously against separatist militants in Jammu and Kashmir, a senior commander of Jaish-e-Muhammad (JeM) was along with two associates killed during a gunfight in southern Pulwama district on Wednesday. An Army jawan was injured in the clash, a report said.

The J&K police and Army officials said that slain JeM commander Abdur Rehman Alvi alias Fouji Bhai alias Fouji Baba was an Afghan ‘war veteran’ as he is reported to have fought alongside the Taliban before turning to Kashmir a few years ago.

He was also known as an expert in fabricating improvised explosives devices and reportedly involved in the February 14, 2019 terror attack at Lethpora, Pulwama in which more than forty CRPF personnel were killed.

The officials said that fighting broke out in Pulwama’s Kangan area early Wednesday after the J&K’s police’s counterinsurgency Special Operations Group (SOG) together with the Army’s 55 Rashtriya Rifles and the Central Reserve Police Force (CRPF)’s 182 and 183 Battalions launched a cordon-and-search operation to flush out militants dead or alive.

Defence spokesman Colonel Rajesh Kalia said, “The joint operation was launched in the early hours today on specific intelligence input. Soon contact was established with terrorists hiding in the village.”

He added that announcements were made through public address system asking the holed up militants to surrender “but they responded by opening fire on the security forces, triggering the fire fight.”

A J&K police spokesman said that Alvi was active in Kashmir Valley since 2017. “The investigations reveal he was an IED expert and the mastermind of recent failed car bomb attack in Pulwama,” he said.

The security forces combating a three-decade-old insurgency in J&K had on May 28 claimed that they foiled a militant plan for an act of terror in Pulwama similar to the one carried out in the same district on February 14 last year by timely detection of a Santro car laden with 40-45 kilograms of explosives that was being driven through the district. The IED planted in the car was subsequently detonated by the bomb disposal squad.

The police claimed that Alvi was a close confidante of JeM chief Moulana Masood Azhar and a photograph circulated through social media some time back is testimony of that. In the photograph Alvi is seen flanking Azhar at a function held somewhere in Pakistan.

The police said that the identities of the two other slain militants are yet to be ascertained.

While addressing a hurriedly called press conference here, Inspector General of Police (Kashmir range) Vijay Kumar said that investigations have also revealed that Alvi, a resident of Multan in Pakistani Punjab, was a relative of the JeM chief.

He termed his killing as a “big success” of the security forces in their fight against militants, 75 of whom, as per his claim, have been killed, so far, this year. The slain included top commanders of the JeM, Hizb-ul-Mujahideen and Lashkar-e-Tayyaba, he said.

The IGP said that the two other militants appeared to be local Kashmiris. “We have called some people to identity the slain and if they turn out to be locals, their parents will be allowed to participate in the burial in (far off) Baramulla district,” he said.

He added that two more IED ‘experts’ of the JeM still at large are known within the militant ranks by their codenames Waleed Bhai and Lamboo Bhai, both foreigners.

Replying to questions, the IGP said that the police have learnt that the JeM chief in Kashmir Abdullah Rashid Gazi is operating from the woods of Pulwama’s Khrew area. “I’m sure he too will be neutralized once he comes down. But we can even catch him where he is hiding currently. It is because of our source base that we have identified the Jaish chief otherwise the outfit doesn’t disclose the name of its head,” he said.

The security forces had in a similar operation on Tuesday killed two suspected militants in Saimoh village of Tral area in Pulwama. Earlier, the Army had claimed killing thirteen infiltrating militants in a series of clashes at different locations along the Line of Control (LoC) in J&K’s Poonch and Rajouri districts.

However, independent sources confirmed the killing of only three suspected militants in Rajouri’s Noushera sector on Monday.