India stands seventh among the nations worst hit by the COVID-19 pandemic after the US, Brazil, Russia, the UK, Spain and Italy 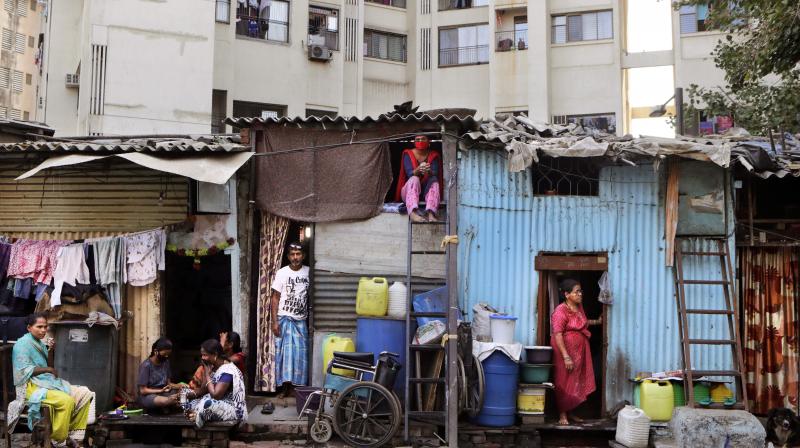 People rest by their shanties at Dharavi, one of Asia's largest slums, during lockdown to prevent the spread of the coronavirus in Mumbai. PTI photo

New Delhi: Coronavirus cases in India saw a record single-day jump of 9,304 cases on Thursday pushing the total tally to 2,16,919, while the death toll climbed to 6,075 with 260 new fatalities, according to the Union health ministry.

India stood seventh among the nations worst hit by the COVID-19 pandemic after the US, Brazil, Russia, the UK, Spain and Italy.

The health ministry said the number of active COVID-19 cases stood at 1,06,737 while 1,04,106 people have recovered and one patient has migrated.

"Thus, around 47.99 per cent patients have recovered so far," a senior official said.

Of the 260 deaths reported since Wednesday morning, 122 were in Maharashtra, 50 in Delhi, 30 in Gujarat, 11 in Tamil Nadu, 10 in West Bengal, seven each in Madhya Pradesh, Uttar Pradesh and Telangana, six in Rajasthan, four in Andhra Pradesh and one each in Bihar, Chhattisgarh, Jammu and Kashmir, Karnataka, Punjab and Uttarakhand.

Himachal Pradesh, Chandigarh and Jharkhand have registered five COVID-19 deaths each, Assam has recorded four deaths while Chhattisgarh has reported two deaths so far. Meghalaya and Ladakh have reported one COVID-19 fatality each.

According to the ministry's website, more than 70 per cent of the deaths were due to comorbidities.

Punjab has reported 2,376 cases of coronavirus infection so far while Assam has 1,672 cases. A total of 1,494 people have been infected with the virus in Kerala and 1,085 in Uttarakhand.

A total of 79 cases has been reported in Goa, 58 in Nagaland, 38 in Arunachal Pradesh and 33 each in the Andaman and Nicobar Islands and Meghalaya. Mizoram has reported 14 cases, Dadar and Nagar Haveli has eight cases while Sikkim has reported two cases till now.

On its website, the ministry said, "7,483 cases are being reassigned to states. Our figures are being reconciled with the ICMR." State-wise distribution is subject to further verification and reconciliation, it added.