India   All India  04 Jun 2021  Kamala Harris dials PM Modi on US decision to send vaccines to India
India, All India

According to the White House, the sharing of millions of US vaccines with other countries signals a major commitment by the US government 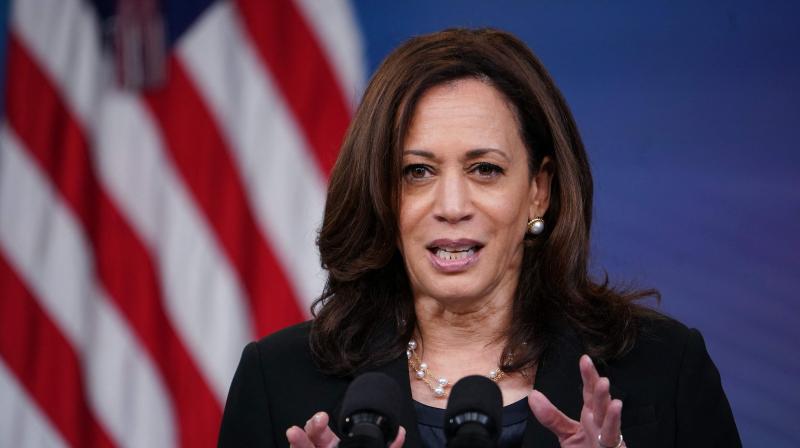 Kamala Harris on Thursday made her first phone call to Prime Minister Narendra Modi to inform him the decision of the Biden Administration to send tens of thousands of doses of life-saving COVID-19 vaccines to India. (Photo: AFP)

Washington: US Vice President Kamala Harris on Thursday made her first phone call to Prime Minister Narendra Modi to inform him the decision of the Biden Administration to send tens of thousands of doses of life-saving COVID-19 vaccines to India.

"In four separate calls, the Vice President notified each of the leaders that the Biden-Harris Administration will begin sharing the first 25 million doses of COVID vaccines to their respective countries and others, as part of the Biden-Harris Administration's framework for sharing at least 80 million vaccines globally by the end of June, her Senior Advisor and Chief Spokesperson Symone Sanders said.

The Vice President reiterated that the Administration's efforts are focused on achieving broad global coverage, responding to surges and other urgent situations and public health needs, and helping as many countries as possible who requested vaccines, the spokesperson said.

The four leaders thanked her, and they agreed to continue working together to address COVID-19 and advance our mutual interests around the world, Sanders added.

Earlier, President Joe Biden announced that the US will allocate 75 per cent - nearly 1.9 crore of the first tranche of 2.5 crore doses - of unused COVID-19 vaccines from its stockpile through the UN-backed COVAX global vaccine sharing programme to countries in South and Southeast Asia as well as Africa as part of his administration's framework for sharing 80 million (8 crore) vaccines globally by the end of June.

According to a White House fact sheet, nearly 19 million vaccines will be shared through COVAX. Of these approximately six million for South and Central America to the following countries: Brazil, Argentina, Colombia, Costa Rica, Peru, Ecuador, Paraguay, Bolivia, Guatemala, El Salvador, Honduras, Panama, Haiti, and other Caribbean Community (CARICOM) countries, as well as the Dominican Republic.

Approximately five million for Africa to be shared with countries that will be selected in coordination with the African Union.

The White House said approximately six million will be targeted toward regional priorities and partner recipients, including Mexico, Canada, and the Republic of Korea, West Bank and Gaza, Ukraine, Kosovo, Haiti, Georgia, Egypt, Jordan, Iraq, and Yemen, as well as for United Nations frontline workers.

The country-wise allocation of the vaccine doses was not made public.

According to the White House, the sharing of millions of US vaccines with other countries signals a major commitment by the US government.

"Just like in the United States, we will move as expeditiously as possible, while abiding by US and host country regulatory and legal requirements, to facilitate the safe and secure transport of vaccines across international borders, it said.

"This will take time, but the President has directed the Administration to use all the levers of the US government to protect individuals from this virus as quickly as possible. The specific vaccines and amounts will be determined and shared as the Administration works through the logistical, regulatory and other parameters particular to each region and country," said the White House.