India   All India  04 Jul 2020  In veiled reference to China, PM Modi in Ladakh says 'age of expansionism is over'
India, All India

In veiled reference to China, PM Modi in Ladakh says 'age of expansionism is over'

Nimu, on the Indus’ banks, is surrounded by the Zanskar range at an elevation of 10,300 ft, about 186 km short of Galwan Valley. 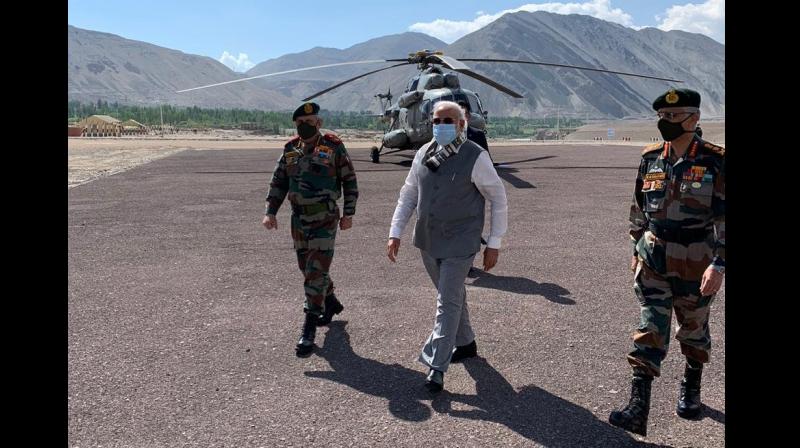 New Delhi/Srinagar: Prime Minister Narendra Modi, who made a surprise visit to Leh on Friday, said in an address to soldiers deployed on China border that “the era of expansionism is over” and the valour shown by Indian soldiers at Galwan Valley on June 15 had told the world about India’s strength.

In a warning to China, which was trying to change the Line of Actual Control (LAC) at Pangong Tso and Galwan Valley, the PM, without naming that country, said expansionism always hurt world peace and history was witness that expansionist powers had either been defeated or had to retreat.

“This is the era of development. The whole world has made up its mind against expansionism,” Modi said, addressing the soldiers at Nimu, a forward Army base 35 km east of Ladakh’s capital Leh.

He said India’s enemies had seen the courage of the Army’s Leh-based 14 Corps, also known as Fire and Fury Corps. “Our enemies have seen your fire and also your fury,” said the PM, wearing a 14 Corps cap.

Citing the Gita shloka Veer Bhogya Vasundhara (The brave shall inherit the earth), which is also the motto of the Army’s Rajputana Rifles, the PM said the weak can never initiate peace, as bravery is a pre-requisite. He said India was modernising its weapons, upgrading its infrastructure and enhancing its strength in land, sea, air and space warfare.

Modi’s assertions are seen as a strong and direct message to Beijing after the June 15 clash with troops of China’s People’s Liberation Army, in which 20 Indian soldiers were killed in the strategic Galwan Valley.

Modi made an unannounced visit to Ladakh Friday to get first-hand information about the LAC situation. He was accompanied by Chief of Defence Staff Gen. Bipin Rawat and Army Chief Gen. M.M. Naravane. He was briefed on military preparedness by top Army brass, including Northern Command chief Lt General YK Joshi in Nimu.

Nimu, on the Indus’ banks, is surrounded by the Zanskar range at an elevation of 3,140 metres (10,300 ft), about 186 km short of Galwan Valley. The PM interacted with personnel of the Army, Air Force and ITBP. He also met Indian soldiers injured in the clash with Chinese soldiers on June 15 at the Leh Military Hospital. “We will never bow to any power of the world,” Mr Modi told the injured jawans. Modi also visited the Hall of Fame Museum, which is run by Indian Army in Leh. He paid tribute to the soldiers killed in action during Galwan Valley clash.

Modi’s Leh visit is also seen as a message to his domestic critics who criticised his alleged weak approach towards China despite reports of its unrelenting aggression at the LAC and belligerence in the Galwan Valley. It is also a huge morale booster to the armed forces that the government and the people of the country are fully backing them.

Addressing soldiers at Nimu, Modi paid glowing tributes to the 20 Indian soldiers killed in the Galwan Valley, saying tales of their bravery and valour were echoing in every part of the country. “Your courage is higher than the heights where you are serving today… Not only me, the entire nation believes in you. We all are proud of you,” he said.

“Ladakh is the head of the country. This is the symbol of pride for 130 crore citizens of India. This land belongs to the people who are willing to make the ultimate sacrifice,” said Modi. Seeing women Army officers in the front row, the PM said: “I am looking at women soldiers in front of me. In the battlefield at the border, this view is inspiring.”

The government earlier announced that defence minister Rajnath Singh would visit Ladakh on Friday, but this was later cancelled, and the PM instead flew to Leh.