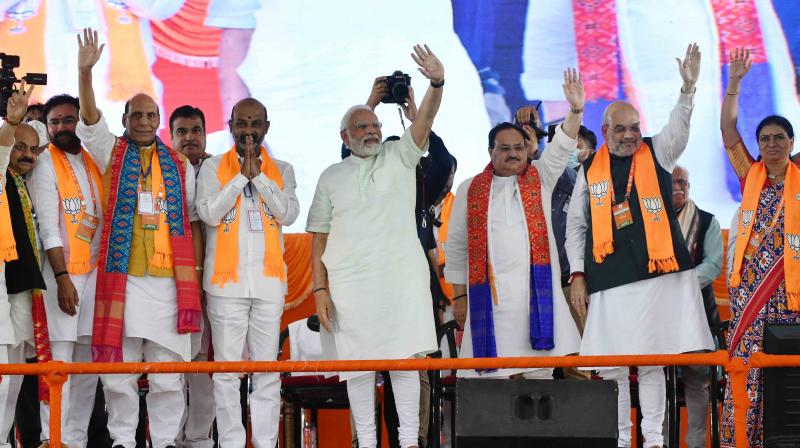 Hyderabad: Prime Minister Narendra Modi on Sunday said that the BJP was growing rapidly and continuously in Telangana since the 2019 Lok Sabha polls, which is reflective of the strong desire of the people of Telangana to install a "double engine sarkar (BJP government at the Centre and state)" soon.

Mr Modi also mooted a "Sneha Yatra", a massive public outreach programme, to reach out to minority communities, especially Muslims and Christians, to win their confidence.

Addressing a mammoth public meeting titled "Vijay Sankalp Sabha" at the Parade Grounds on Sunday to mark the conclusion of the BJP's two-day national executive meeting in the city, the PM stated that the double-engine sarkar in Telangana would ensure faster development and prosperity of the state.

Though the PM did not name the ruling TRS or chief minister K. Chandrashekar Rao in his 25-minute speech, all the other top BJP brass on the dais slammed KCR's "dynastic politics" and "corrupt rule".

In an apparent attempt to remove insecurity among the minorities, the Prime Minister directed party leaders from northeastern states to showcase to the rest of the country how the BJP government there had not only safeguarded the Christian community’s interests, but also worked for their prosperity.

Sources told this newspaper that the Prime Minister wanted the party to take a cue from its recent victories in Rampur and Azamgarh Lok Sabha by-polls, which are Muslim-dominated regions. Mr Modi reportedly highlighted misconceptions about the party’s approach towards minorities, mainly due to Opposition propaganda, and is seeking to reach out to all communities to convey that the party was not against any religion.

The Prime Minister, according to sources, said all states should emulate the "UP Model" in which most backward sections among the Muslim community were identified and brought into the party’s fold. They extended full support to the party in the recent by-polls, he pointed out.

Highlighting that the party had nominated a tribal woman for the presidential election, Mr Modi asked the party cadre to put up Droupadi Murmu’s photo in all the panchayat offices, especially in tribal hamlets. He suggested the party celebrate occasions like Mother’s Day, Father’s Day, Police Commemoration Day, and Army Day with the public.

Explaining the spirit of the initiative, a former Union minister said the party would also acknowledge the contributions of officials and staff working in government offices. "After all, if staff at a police station, or a primary health centre, or other government offices are delivering good services to citizens, what is wrong in acknowledging such work and letting them know that the party values their contributions to the country?" the minister said.

Mr Modi said that in the past eight years of his government at the Centre, several policies have been launched for the welfare of the poor, Dalits, backward classes, and tribal people. "That's why people from all sections of society have increased trust in our government and its policies," the PM said.

Meanwhile, the PM also announced the setting up of a mega textile park in Telangana as part of the Centre's decision to set up seven such parks across the country to increase textile exports from India and generate employment.

He said Telangana was a beneficiary of various central welfare schemes and development programmes in the past eight years.

The PM lavished praise on Telangana, its history and its culture. "People of Telangana are known for their hard work. They are highly talented. Telangana is known for its rich history and culture, and its art and architecture are a matter of pride for all of us," Mr Modi said.

Mr Modi also heaped praise on Hyderabad city. He said, "Hyderabad is the symbol and centre of self-reliance and self-confidence in the country. There is similar potential for several other towns and cities in Telangana. When the BJP's double-engine government is formed in Telangana, it will put the development of these cities and towns on "fast track mode."